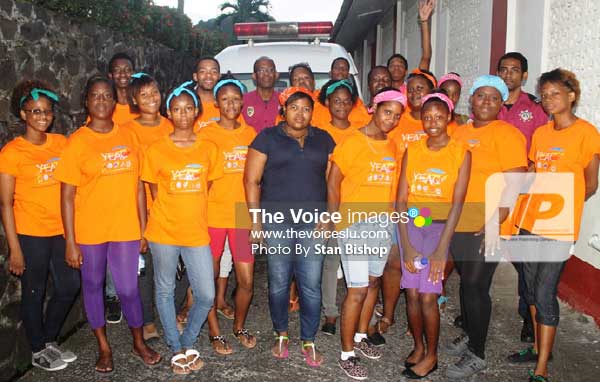 Share this post
A CASTRIES-BASED youth organization is seeking to spread its reach in the new year to prepare young people with the skills needed to react to emergency situations. What it also needs is the support from sponsors, the public and the media in getting its work done and message across.

Many people might be unfamiliar with the Saint Lucia Youth Emergency Action Committee (YEAC). However, this dynamic youth organization that has community development and volunteerism at its core is leaving quite a positive impression on the many individuals and organizations it serves.

Since its inception in September 2011, YEAC (Saint Lucia), which has similar partner organizations in Jamaica, Grenada and the Dominican Republic, has been familiarizing its members with the skills necessary for responding to natural and man-made disasters, all in an effort to minimize injury and reduce loss of property.

Project Manager for YEAC (Saint Lucia), Allister Phillip, told The VOICE that getting its message out is as important as the work the group does. Despite being around for five years, she said, support for the group has been limited to a handful of partners.

The group, which won the award for Outstanding Religious Youth Group at this year’s national Youth Awards, recently launched Phase 5 of its programme, which runs from June 2016 to June 2017.

Sponsors for YEAC include Caritas Antilles, Catholic Relief Services and USAID. However, the group is hoping that other organizations would assist in its work.

“We’re basically trying to sensitize the media about our activities and objectives because among our goals is having the media as sponsors and partners,” Phillip said. “It is important to get Saint Lucians more aware and in tune with what we do as a group. Our partnership with the media is really to create a bond that can result in consistent coverage of our activities.”

The group currently has about 50 members and is looking to expand on our membership. While YEAC (Saint Lucia) is comprised of members specifically from Marchand, TiRocher and Forestiere, Phillip said requests have been pouring in from prospective members from other communities. However, due to financial and logistical constraints, it’s proving to be a challenge. As such, increased sponsorship becomes necessary, she said.

The group works with organizations such as the St. Lucia Red Cross, St. John Ambulance and National Emergency Management Office (NEMO) to foster strategic partnerships to acquire the expertise from those organizations that are already versed in the required training.

YEAC (Saint Lucia) has also worked with the Ministry of Fisheries and NEMO to clean up the sargassum seaweed that washed up on the Grande Anse beach. The group also donated water tanks, first aid kits and fire extinguishers to churches, schools and emergency shelters as well as doing minor repairs to these buildings and has also done emergency drills at these locations and schools.