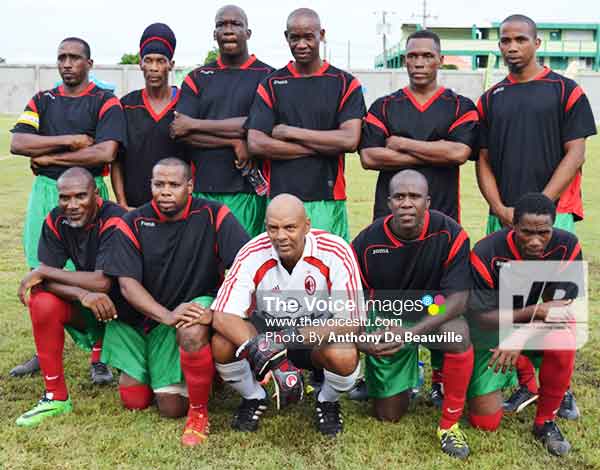 IT was a goal feast this past weekend in the town of Vieux Fort with 18 goals scored in five matches played as the Veterans Football Tournament kicked off at the Phillip Marcellin Grounds.

The event is organized by Veterans In Sports Inc, in collaboration with Caribbean Alliance, the Saint Lucia Football Association and Blackheart Productions Sports and Entertainment.

The highlight of the weekend was a hat -trick scored by Behind the College All Stars Jeremiah Reneau against FLOW Lancers FC and defending Caribbean Alliance champions Soufriere and Plate Champions Valley Legends playing to an exciting 3 – 3 draw.

On day one of the tournament there was an eye catching opening ceremony with the march past of 11 out of the 16 participating teams, the national anthem, prayers, brief opening remarks, a brand new football kit presented to the 2015 – 2016 champions Soufriere Veterans and opening remarks from the Tournament Director David Christopher and Veterans In Sports Inc CEO Alvin Malaykhan.

On the field of play three matches were played. VSADC defeated FLOW Lancers FC 2 – 0. Despite having the experienced Gilroy Hall in the mid field area and Vilan Edward in goal. For VSADC the goal scorers were – Barnette Bledman in the 13th minute and Mathius Jules in the 59th minute.

In game two, Congorians and Behind the College All Stars played to an exciting 3 – 3 draw. The experienced Jerimiah Reneau scored the first hat – trick of the tournament on the opening day with goals in the 28th, 32nd and 77th minutes respectively.

For Congorians the goal scorers were LyciusAuguste in the 23rd minute, Claude Amedee in the 34th minute and Marinus Mathurin in the 40th minute; while Central Vieux Fort with former national player Titus “TT” Elva in their mix defeated Dennery All Blacks 2 – 0 in a keenly contested encounter that could have gone either way. The 2 – 0 defeat does not reflect how well Dennery All Blacks played up until the final whistle. For VFC, the goal scorers were Morrison Raveneau in the 35th minute and Roger Winters in the 79th minute.

It can best be described as the final before the final between defending champions Caribbean Alliance Soufriere and Plate champions Valley Legends and despite the soggy outfield and a couple of goalkeeping errors, both teams showed their worth and experience of yesteryears. Valencious Joseph opened the scoring for Valley Legends in the 19th minute and scored another in the 30th minute to seize the half time advantage.

On the resumption the tables turned as the defending champions Soufriere came out firing with two quick strikes in the 52nd minute from Augustus Lucien and S. Abraham in the 57th minute to get things even again.

The boys from Sulphur Town had enough energy in the tank to add another in the 71st from the boots of Mathinus Phillip, but Valley Legends never allowed that to deter them as they continued to press on and in so doing got the much deserved equalizer from the boots of Clifford Sandiford in the 82nd minute to share the points.

Also on Sunday – for the 16th spot in the tournament, Mon Repos defeated a highly favoured La Clery team with the likes of the formidable Earl Jean currently on vacation 2 -1. For Mon Repos the goal scorers were Keth Stephen in the 73rd minute and Dimiah Norbert in the 78th minute. Jerry Charles better known for his Rugby and Basketball exploits put La Clery in the lead in the 27th minute.

Meanwhile, all roads lead to the Marchand Grounds this coming Saturday and Sunday when another round of matches in Veterans Tournament will be played.