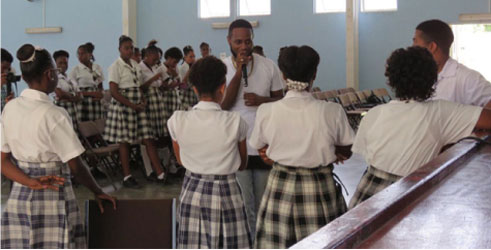 KINGSTOWN, St. Vincent, Oct 31. CMC – Igal Adams, the host of the opposition New Democratic Party (NDP) daily radio programme, New Times, says he is stepping down from hosting the programme until the police conclude their investigation of unlawful sexual intercourse with a minor, in which he is a person of interest.

The 63-year-old Adams was questioned on Friday night, one week after the mother of the 14-year-old girl told police that he had had sex with the child at least twice since 2013, when the girl was 11 years old.

Adams was released on Saturday evening without charge, pending the outcome of further investigation.

In St. Vincent and the Grenadines, the age of consent is 15.

Adams, who announced his decision to step down on Monday, has denied the allegations.

“I, Igal Adams, want to state categorically that I deny any and all allegations brought against me. Those allegations are false and unfounded.”

“I, as a Christian and an individual who believe in fair play, do take this decision to stand down as host of the NDP New Times programme until the police have completed their investigation,” Adams said, calling on the police “to at least try to conclude the investigation as speedily and completely as possible.”