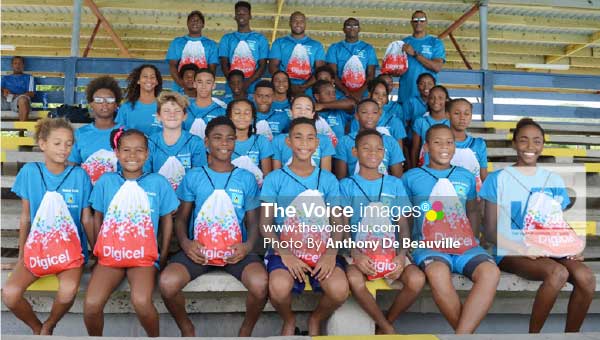 GRENADA retained the Organization of Eastern Caribbean States Swimming Championship which ended in Saint Vincent and the Grenadines this past Sunday.

The Saint Lucia National Team’s travel got off to a bumpy start. In response to the inclement weather, authorities in Saint Vincent and the Grenadines had to close a flooded E. T. Joshua Airport for a day, and the team was stuck en route in Barbados. They were well looked after by Team Manager EldrisMauricette and helpful LIAT staff. Despite reaching one day later than scheduled, swimmers quickly refocused on the competition.

Saint Lucia’s young boys (8 and under) were a force to be reckoned with. They came for a clean sweep of 1st, 2nd and 3rd place in the 25m fly, with Antoine Destang taking gold and setting a new OECS record, TherronHerelle winning silver and Karic Charles bronze. Together with D’Andre Blanchard, these same boys brought home gold in the 200m medley relay in the 10 and under age group.

Veronica Brown (girls 13-14) was Saint Lucia’s only competitor in the Open Water competition, where she swam 5 kilometres (over 3.1 miles).

Overall, swimmers and coaches were pleased with Saint Lucia’s performance despite challenges with air travel and several athletes’ health. Most swimmers improved their personal best times and collected points towards Saint Lucia’s score. The adventurous trip strengthened the swimmers’ character and life skills.

Anya Hilaire (10) reflected: “This meet was rocky at the start with the delay at the airport and all the rain, but on the last day there was a lot of cheering. I really enjoyed the relays; the vibe was really nice. The hotel and breakfast was very organized”. Ziv Reynolds (11) added: “The best thing about the meet was that I got best times in everything and stayed with my friends”.