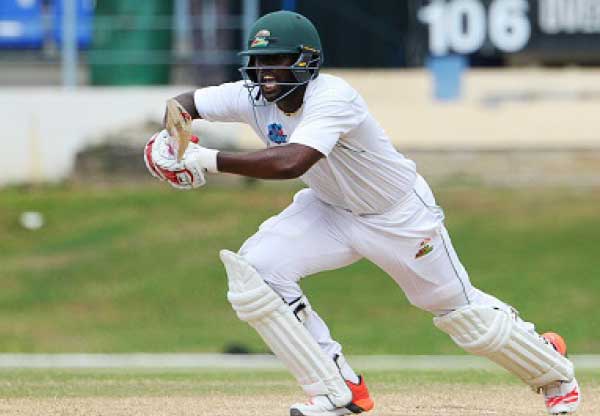 The left-hander hit 52 and wicketkeeper Anthony Bramble top-scored with 58 as Jaguars, teetering on 73 for four overnight, were bowled out for 219 in their first innings at the Darren Sammy National Stadium.

All-rounder Chris Barnwell chipped in with 33 and captain Leon Johnson, 30, efforts which helped the visitors eke out a narrow first innings lead of 27.

Fast bowler Keon Joseph then ripped through the Volcanoes top order in the hosts’ second turn at the crease, leaving them stumbling on 90 for four ahead of Monday’s penultimate day.

Opener Tyrone Theophile has so far top-scored with 39 while wicketkeeper Sunil Ambris was unbeaten on 28.

Joseph, who knocked over Devon Smith for a first ball ‘duck’ and Jerlani Robinson for four in the first over of the innings, has taken three for 26.

Earlier, Johnson and Barnwell extended their overnight fifth wicket stand to 47 before they were separated. Unbeaten on 21 at the start, Johnson was bowled by Matthew on 91 and with eight runs added, Barnwell departed lbw to seamer Kyle Mayers (2-43).

In a hole at 99 for six, Bramble and Reifer combined in a 104-run, seventh wicket stand which allowed Jaguars to put their noses in front.

Bramble was free-scoring, facing 75 balls and stroking six fours and two sixes while Reifer was also positive, carving out eight fours and a six in his 77-ball knock.

Once their resistance ended, however, Jaguars lost their last four wickets for 16 runs.