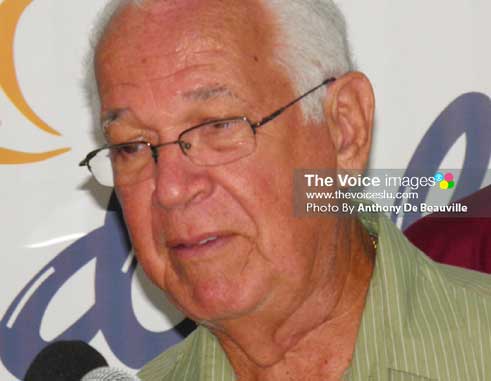 CRICKET lovers around the world will be losing a once popular voice in cricket commentary come 2017. Guyanese commentator, Joseph Perreira with over 50 years of regional and international experience in sports analysis, has decided to wave his radio commentary career good-bye following his stint during the WICB Professional Cricket League Regional 4-Day match between Barbados Pride and Guyana Jaguars scheduled to take place at Bourda in Guyana from December 9 to 12.

When Windward Islands Volcanoes play Guyana Jaguars at the Daren Sammy Cricket Ground from November 26-29 if he is selected on the commentary panel, this will be his final game in Saint Lucia.

Perreira’s decision to quit is not because he has lost the passion or interest in cricket broadcasting, but because the Radio Franchise owners of the West Indies Home Series have not been including him on their panel for the last three seasons.

“Reds,” as he his affectionally known, points out that although he has been active doing the four-day regional matches in Saint Vincent, Barbados, Grenada and here in Saint Lucia, he was not chosen for any of the four Caribbean Premier League (CPL) T20 matches as well as the West Indies-India Test Match here at the Daren Sammy Cricket Ground.

When “Reds” came to Saint Lucia in 1984 to head the OECS Sports Desk, he was quickly snapped up by Radio Saint Lucia as part of their cricket commentary team. He says he owes a great deal of gratitude to Radio Saint Lucia’s Management, and remembers vividly his fellow commentators in Hervon Henry (Radio Saint Lucia Sports Editor), Vance Pilgrim, Cletus Springer, Steve McNamara, Gordon Stewart and Rupert Branford – all of whom made him feel at home. He also remembers the scorers in deceased Julius Drysdale and Anslem Degazon who were quietly entertaining. “Reds” was also keen to mention the positive reception he received from the then President of the Saint Lucia National Cricket Association, Julian Hunte, and Secretary Oliver Scott.

“Reds,” who covered more than 350 First-Class matches (including 147 Test matches), over 200 One-Day Internationals (ODIs), and a number of Kerry Packer World Series one dayers and Super Tests, has made a great contribution to the game and is well respected throughout the cricketing world. He began his first-class radio commentary when British Guiana played Trinidad and Tobago at Rosehall in Berbice in 1961. He remembers that it was part of the Inter-Colonial Series and Bourda was also hosting the Barbados-Jamaica clash which featured Conrad Hunte and Cammie Smith against the fiery Roy Gilchrist. The Bourda match was the main attraction to Radio Demerara, which also had to put together a broadcast team for the British Guiana-Trinidad and Tobago game taking place at the same time in British Guiana. He was at that time blooded as a raw, young and enthusiastic 22-year old. He recalls enduring some butterflies in the tummy on debut and was very happy that the event came to an end without him making too many errors. Reds went on to develop his own inimitable style which many came to admire.

He spent 1962 to 1967 in England, where among other things; he had pre-season engagements with football clubs Chelsea and Arsenal because he was very interested in football coaching. He soon became Sports Convenor for the West Indies Students Centre in London.

Luckily for “Reds,” on his return to Guyana in 1967, a new Radio Station, Guyana Broadcasting Service (GBS), had been established and he was able to continue his cricket commentaries in addition to widening his broadcasting skills in boxing, football, motor-racing, basketball and table tennis.

Reds did his first Test match (West Indies versus India) at Bourda in 1971 and that was followed by another stint when New Zealand played the West Indies in 1972 at the same venue. He said his breakthrough came in 1973 when Ian Chappell’s Australians came to the Caribbean. He was first invited by the Jamaica Broadcasting Corporation to be part of the panel for the First Test at Sabina Park and then received another invitation from CBC Barbados to be part of their commentary team for the Second Test at Kensington Oval. He grasped those opportunities with both hands and never looked back.

“Reds” Perreira began his relationship with the deceased Tony Cozier during the 1971 West Indies-India Test match in Guyana and the pairing continued throughout the cricketing world for three decades working on behalf of the Caribbean Broadcasting Union (CBU).

The stocky, silver-haired commentator is still active in the field of sports, interviewing sports men and women for a local TV Station. He took this opportunity to shower praises on local cricket commentator, Claudius Emmanuel, and hopes that the young man will get opportunities to do regional and International matches outside of Saint Lucia.

When asked “whether an average man or woman aspire to be a cricket commentator in this modern era, Perreira’s response was: “A lot will depend on opportunities provided by radio stations to cover local cricket. If aspiring commentators are allowed to do reports and commentaries on local games, a young commentator will be able to graduate to the first-class level in the Windward and Leeward Islands. Unfortunately, not many radio stations are including cricket as part of their programming and therefore presenting the opportunities for development is almost impossible. With the loss of AM Frequency in Saint Lucia and other Caribbean countries, most of the stations except CBC Radio in Barbados, are heard on FM Frequency and therefore that limits the programme director, who cannot put through cricket on the AM Frequency as was done in the 60s, 70s, and 80s.”

So a career that started in Guyana and blossomed in the rest of the world, has run its full course, and will also come to end exactly where it first started – in his native Guyana.