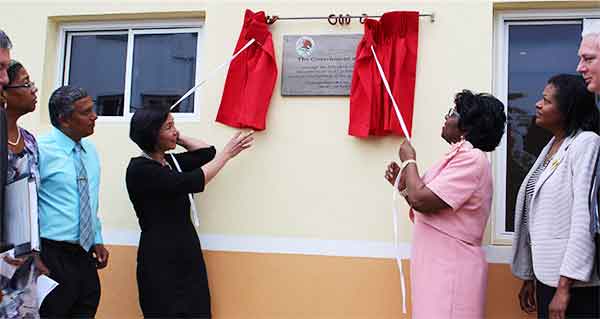 PRIME Minister Allen Chastanet has again pledged his government’s commitment to deliver a reconstructed St Jude Hospital to the people of St Lucia within the shortest possible time.

He was speaking last Thursday at a ceremony in which the government of Mexico handed over two of three promised facilities to the hospital.

In response to calls for support by the Government of St. Lucia to reconstruct the hospital following the fire there in September 2009, Mexico, via the Infrastructure Fund Trust for Mesoamerican and Caribbean Countries, offered to donate three hospital projects namely: The construction of a morgue building, construction of the security monitoring and ambulance building and the supply and installation of the external area lighting of the hospital all with associated renewable energy solutions.

The external lighting however is scheduled to be delivered when the hospital is in its final stage of construction.

Ambassador Socorra Flores Liera, Vice Minister for Foreign Affairs of Mexico for Latin America and the Caribbean speaking at the handing over ceremony said the three components have been gladly supported by her country based on the firm conviction of the benefit they represent for the people of St. Lucia.

She said: “We want to thank the government for all their efforts to give the people a stronger and more efficient healthcare system. I also what to congratulate St. Jude Hospital personnel as well as UNOPS for ensuring transparency during the process both in terms of budget and time – and I think the quality of the project that I have had the opportunity to look around the morgue component and right here today speaks of the good job they have done.”

Minister of Economic Development, Guy Joseph, stated that the projects were funded to the tune of US $2.7 million. He had high praise for the project implementation company, UNOPS, for their professional workmanship and efficient project management. Joseph added: “Today we are here to mark the handing over of the Ambulance facility and the Morgue. But the reality is, this is the component of the hospital that was not funded at the time when they were engaged and we are happy that they came on board, the government of Mexico through UNOPS in implementing this phase of the project. They may have been the last set of persons to come on board but they have been the first to deliver.”

Prime Minister Allen Chastanet, thanked the Government and People of Mexico for their generosity to St. Lucia while providing the reassurance that his government was focused on delivering the St. Jude Hospital to the people of St. Lucia in the soonest possible time.

Chastanet said: “I stand here today to acknowledge the progress on the St. Jude Hospital reconstruction project. It is no secret that this project has tested the extreme patience of our nation. And while I must beg for more tolerance from the good people of this country, I also have good news. Thanks to the generosity of the people and government of Mexico for taking on the construction of the Ambulance and Security, the Morgue building and for facilitating the external area lighting. We understand and appreciate the importance of partners such as the people and government of Mexico who continue to support our efforts in guaranteeing our citizens and visitors top class healthcare. ”

Governor General of St. Lucia, Dame PearletteLouisy and Ambassador Socorro Flores Liera unveiled the plaques on the security monitoring and ambulance building and the morgue. They were accompanied by the Prime Minister, other government ministers and specially invited guests.