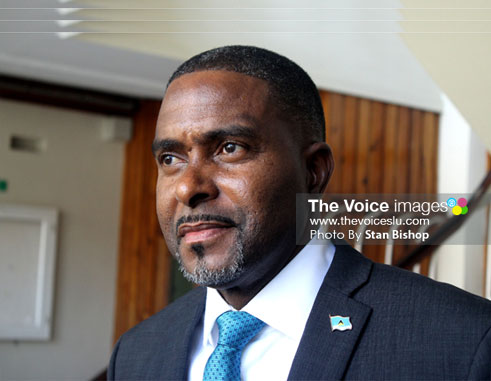 ‘PULL UP YOUR SOCKS.’

THE Government of Saint Lucia yesterday was reminded that its efforts at improving the country’s ranking in the World Bank’ Ease of Doing Business Report could be of no significance if simple things within its ministries are not taken care of.

Mary Julianna Charles, President of the Bar Association of St. Lucia reminded Finance Minister Dr. Ubaldus Raymond and members of the Chamber of Commerce, Industry and Agriculture, at their Annual General Meeting, of the simple things which she said will make it impossible to do business in Saint Lucia in an easy and efficient manner.

“The Ministry of Physical Planning has another issue which impacts negatively on members of the public. Lawyers recognize the significance of that negativity because we are the ones you have charged with preparing your documents. A simple thing like a map sheet, the photo copier is not working. These are negative impacts on the development of Saint Lucia.

“We have a Citizen by Investment Programme. You mean to tell me we will invite a multi-million dollar investor to do business and I cannot get a simple map sheet on time. Let us try to put our house in order,” Charles said.

The Bar Association President said that she profited the opportunity to bring these matters to the attention of the government through Minister Raymond, since he was the one in attendance, urging him to attend to these simple matters because of their urgency.

“I will not touch on the DCA (Development Control Authority) or the Companies Registry, we may be in here for the whole day,” she told members and invited guests at the Chamber’s meeting.

Minister Raymond in response said that he is aware of the issues the public is faced with regarding the ease of doing business, adding that the government had started a process to fix the issues raised.

In the reports published by the World Bank on the Ease of Doing Business in which it ranks 189 economies, Saint Lucia continues to be registered as one of the best countries within CARICOM to do business, having ranked number one from 2007 – 2014 and number two in the 2016 and 2017 reports.

To date an Ease of Doing Business Task Force has been established to oversee the reforms in Saint Lucia. There is also a special unit within the Department of Commerce responsible for coordinating the reform Agenda.