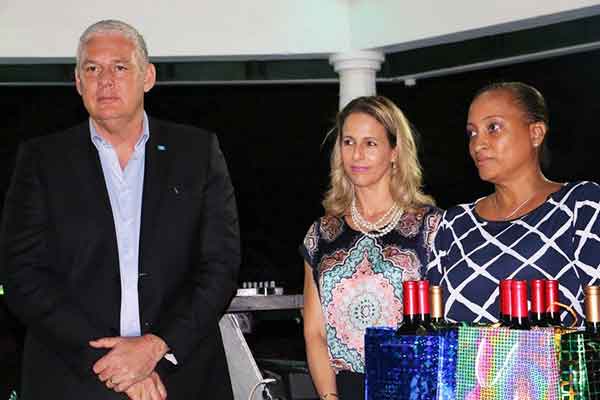 Individuals who undertook a significant role in the nation’s safety and recovery during the passage and aftermath of Tropical Storm Matthew in September have received a resounding vote of thanks from Prime Minister Allen Chastanet.

The Prime Minister hosted a cocktail at the Prime Minister’s Official Residence in Vigie on Friday, November 4 to convey the government’s gratitudeto the Saint Lucia Electricity Services (LUCELEC), representatives of the Water and Sewerage Company (WASCO) as well as the media.

Before handing out some tokens,the Prime Minister highlightedthe dedication of those who restored electricity, water, cleared roads and kept the nation informed.

“The workers from LUCELEC and WASCO always prove what they are prepared to do when we have a hurricane. Every single time that we have a crisis in this country, you go to work, you put your life at risk, you work these extra hours. But the most important thing is that you deliver to Saint Lucia every single time.”

The media houses who were out on the ground also received a resounding commendation from the Prime Minister.
“We just want to say that we are so grateful for what you do. The reporters who were out there filming and documenting what took place, the radio hosts who kept the lines going, giving the information to people that were scared; a big thank you to all of you for the work that you do.”

The island’s leader toured the agricultural belt extensively after the passage of Tropical Storm Matthew, during which time he acknowledged the Ministry of Agriculture and the Ministry of Infrastructure,among various government ministries,that actively responded during and after the storm. The Prime Minister has been immensely concerned about the effect of the storm on farmers and efforts are ongoing to help the sector recover.

Tropical Storm Matthew subsequently went on to developinto what was termed a “monster storm” by September 30,claiming thousands of lives in its wake, particularly on the island of Haiti.