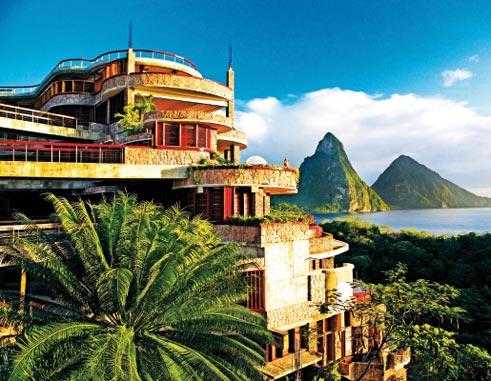 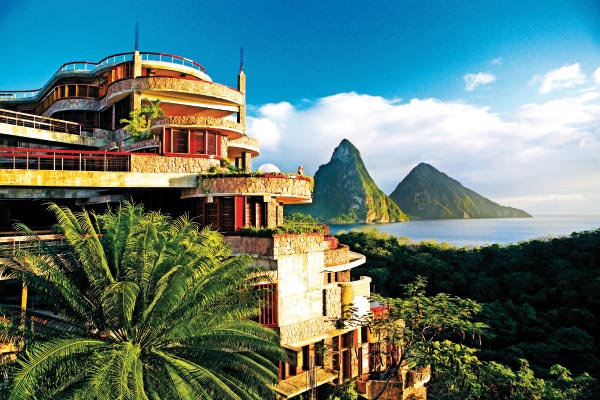 “Achieving LEED (Leadership in Energy and Environmental Design) Gold, as Jade Mountain has done, demonstrates an exceptional level of leadership in the industry. I congratulate both the owners (Nick and Karolin Troubetzkoy) and the project team for this significant achievement,” said Rick Fedrizzi, CEO and Founding Chairman of the USGBC.

“LEED certification is a tremendous tool for the hospitality industry, not only as a path to achieving operating efficiencies for property owners, but also as a way to let guests know that their accommodations have been designed to provide the most comfort and the least impact on the planet,” added Fedrizzi.

Nick Troubetzkoy, who designed and built the multiple award winning resort which overlooks the Piton Mountains rising from the Caribbean Sea in front of Jade Mountain, said: “The beauty of St. Lucia’s landscapes, the warmth and character of its people and the unlimited potential to create something very special here captured my imagination.”

Troubetzkoy described Jade Mountain, artfully sculpted into the mountainside, as “a response to almost every hotel I’ve ever visited … where I found myself disappointed by what I encountered.”

So he set about redesigning the basic concept of a holiday related hotel experience. “I wanted to create individualized spatial environments that would enable guests to forget the fact they’re in a hotel room – and in essence to forget every preconception and to experience the psychology of a dynamic and monumental space on an intuitive and primal emotional level.”

Eliminating the fourth wall in all rooms, or sanctuaries as they are known on property, gave Jade Mountain another clear distinction: “We aimed to give our guests the feeling of entering a private space fully integrated into the island’s ecology, where they could simply relax, breathe in the air while basking in the surroundings and enjoying a wonderful sense of calm and peace – versus being boxed into a traditional hotel room breathing recirculated, machine-processed air,” said the visionary.

Troubetzkoy’s devotion to sustainable design means the resort has its own rainwater fed water purification plant system and recycles treated sewage water which irrigates a nursery which in turn propagates thousands of tropical plants for landscaping.

The design, which merges the free flow of air and the free flow of water through the infinity pools and waterfalls of the sanctuaries, according to Troubetzkoy, is a direct reflection of the natural attributes of the land of St. Lucia itself: “When you combine water with air and the earth itself in this way, you unlock a profound potential for an almost magical level of enjoyment and celebration – a magic that may very well be the ultimate achievement of Jade Mountain and St. Lucia.”

The Green Building Council adjudicators certainly felt Troubetzkoy had succeeded and noted: “This is a very impressive accomplishment for such a unique project, and we congratulate you and your team on implementing some pioneering, non-traditional approaches to the LEED prerequisites and credits.”

The U.S. Green Building Council (www.usgbc.org) monitors the way buildings are designed, constructed and operated through LEED, a leading third-party verification system for sustainable structures around the world.