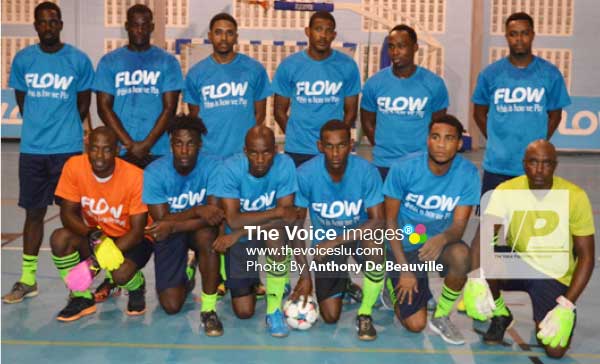 IT was an exciting weekend in the 2016 Corporate Warfare Futsal Tournament for the supporters from the various participating teams.

Now into its second year the tournament is currently ongoing at the Beausejour Indoor Facility. On Friday the games were phenomenal and the atmosphere was absolutely electric despite the pouring rain outside. In the six matches played a total of 33 goals were scored.

In game 1, Caribbean Metals made sure that the fans were covered as they went on to defeat 1st National Bank 3 – 1. For Caribbean Metals, Mario Daniel opened the scoring in the 6th minute, Perseus Marcisse made it 2 – 0 in the 7th minute to seize the halftime advantage.

On the resumption Julius Louisy extended Caribbean Metals lead in the 29th to make it 3 – 0, while Jathan St. Clair pulled one back for 1st National Bank in the 38th minute.

In game two, Guardsman kept the premises safe and won 5 – 0 over NIC, with goals from Winnel Felix in the 13th and 16th minute, and one goal each from the boots of Canicius Phillip in the 18th minute, Phillip Prospere in the 26th minute and Shelton Cherubin in the 28th minute.

The highlight of the night and the one that kept the lights on was LUCELEC’s victory over J.E. Bergasse. There was a double hat – trick for LUCELEC, Chad St. Claire scored in the 13th, 24th and 31st minute, Irvin Faucher made life difficult for the J. E. Bergasse team with goals in the 7th, 28th and 34th minute, while Lucius Prospere added another in the 25th minute.

On Saturday, the goal scoring spree continued as Tenderoni defeated Scotiabank 4 – 3 in an encounter that could have gone either way. The goal scorers for Tenderoni, Dillan Thomas in the 1st minute, Kerlimus Evans in the 9th and 23rd minutes and Lydon Weeks sealed it off in the 37th minute. For Scotiabank, Niale Alexander scored two in the 4th and 35th minutes and Meltus Desir the other in the 25th minute.

The big one on the night was the grudge match between FLOW and Saint Lucia Teachers Union. From the first whistle both teams went at each other as they raised the atmosphere a few notches, but it was Teachers that kept on squandering their chances, FLOW maintained their composure to win 3 – 2 to the delight of the many fans who had stayed despite the heavy rain. For FLOW, the goal scorers were Kissinger Anthony in the 15th minute, and Tristan Pierre had double strikes in the 6th and 25th minute of play. For Teachers, Nehemiah Wilfred was the lone scorer with goals in the 34th and 38th minutes respectively.

Matches continue on Friday 18 from 7:00 p.m. at the BIPF. Saint Lucia Fish Marketing will play NIC, Ministry of Agriculture will take on J.E. Bergasse and Company and Arktel Services will meet Royal Saint Lucian.

Meanwhile, the first set of matches in the round of 16 starts on Saturday 19.