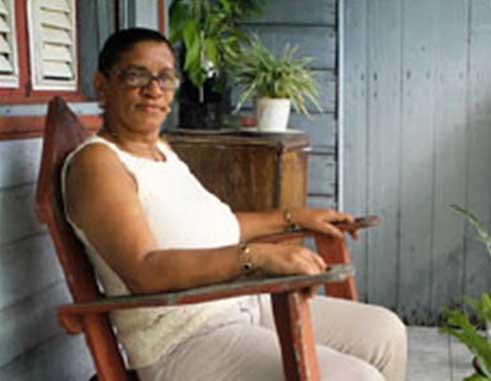 Share this post
WITH the ailing banana industry having a deleterious effect on the livelihoods of many Saint Lucians living in the rural communities, hundreds are forced to become part of the urban drift as they seek alternative employment. But one woman says she is determined to forego the hustle and bustle of city life so that she can reconnect to her rural past.

Meet 59-year-old Petrolina Depradine of Mary Ann Street, Castries, who says she is seriously considering relocating to La Fargue, Choiseul to spend the rest of her years in the house she lived in off and on between ages 6 and 24.

The house at Choiseul belonged to the late Catherina Joseph, who was principal of the St. Aloysius R.C. Boys’ Infant School for many years. Joseph died last year at age 104. Catherina’s father and Depradine’s great-grandmother were siblings.

Depradine, who was born in Barbados, was raised in the house and schooled in Choiseul for a while. After quitting her teaching years later, she moved to Castries to look for another job. The house, she said, is still home to some of her best childhood memories.

“The house is more than 60 years old and Catherine told me that her grandfather and father built it,” Depradine tells me. “We had a big plum tree in the yard which we would often climb. Unfortunately, it fell during the passage of Hurricane Allen.”

Choiseul is renowned for its exquisite art and craft industry. Depradine acknowledges that creative attribute of her childhood community but noted that her fondest memories of growing up in Choiseul included watching the boys skate down the road on their skateboards.

“The best part was that whenever they knew the police motorcycles were approaching, they would hide the skateboards in the bushes and gutter nearby. After the police would have passed, the boys would resume skating,” she explained, with a childish giggle.

She said the official name of the house is St. Joseph’s Villa and she hopes to open it to visitors soon after some much-needed renovation works are completed. The house is chockful of antiques, including bedchambers, armchairs, dressers, cupboards, kitchen and bathroom utensils, chests, tape recorders, decorative ornaments and two clocks said to be over 100 years old.

While she admitted to having discarded most of her antiques when she moved to Castries years ago, Depradine said she remains rooted in her cultural traditions. In fact, she seizes on every opportunity to get her hands any antique that would add beauty and depth to her collection.

While many people from the rural communities are fast becoming city slickers, Depradine says she does not have a problem living the country life. Having had the chance to live in the countryside and the city, she said she prefers the former.

“Whenever I come to Choiseul to visit on weekends, I find it hard to return to Castries,” Depradine said. “Actually, I’m in the process of relocating to Choiseul permanently. I’m really tired of all the hustle and bustle in Castries. The gun violence in the city is also getting out of hand. “If I had to live my life all over again, I would choose to spend it the way we used to be in times past.”

As times change, many people move on to the attractions of modernity, including the city life, often leaving behind the past that played a crucial role in shaping their present circumstance. For Depradine, she says she would quicker leave the city behind so that she can feel at home in Choiseul.

“I wish that people would be more conscious and appreciative of the good old days. Back then, there was a season for everything: catching birds, playing games such as tops and marbles. We don’t have these things anymore,” Depradine said.