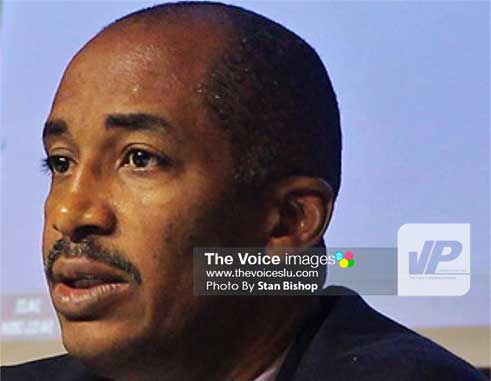 CRISPIN d’Auvergne, Saint Lucia’s Chief Sustainable Development and Environment Officer, says despite this year’s Conference of Parties in Marrakech, Morocco (COP22) being dubbed lukewarm by many, CARICOM’s voice is not going unheard.

d’Auvergne is among a delegation from CARICOM Secretariat which attended this year’s major climate change event that ran from November 7-18 and saw the participation of nearly 20,000 people from close to 200 countries.

Among CARICOM’s key outcomes at COP22 are (1) ensuring predictability for the enhancement of resources and mechanisms or adaptation and loss and damage including in the context of the discussions on the road map to achieving US$100 billion per annum by 2020 as a floor at the political level, and (2) retaining a focus on the need to rapidly reduce global greenhouse gases and for Parties to increase the ambition of their nationally-determined contributions (NDCs) to make them consistent with a 1.5 degrees Celsius emissions pathway.

“CARICOM’s message (at COP22) has been heard but largely through the voice of the alliance of Small Island Developing States (SIDS) and also through The Group of 77 (G-77),” d’Auvergne told The VOICE this week. “The pace of this COP (Conference of Party) is not as hectic as it was in Paris. But we’d still want to see more movement in critical areas, some of which is gradually occurring.”

d’Auvergne said that the area of capacity building with the adoption of a decision for the Paris Committee on Capacity Building was one of the crucial issues which has seen some progress this week.

He said that late Monday an agreement was made on moving forward on the issue of the Warsaw International Mechanism on Loss and Damage. Some significant progress was also made as far as climate financing is concerned. However, negotiations continue.

d’Auvergne said nearly 15 of the hottest years on record have been in the past two decades, adding that unprecedented levels of occurrence and devastating impact of natural disasters have further added credence to the argument that climate change and global warming are real phenomena.

“It is very difficult to deny that there is something afoot with the global climate and that we have a role to play in it,” d’Auvergne said. “You just have to look at the amounts of carbon and greenhouse gases that are released into the atmosphere. On one hand, it is polluting human health but on the other hand it is clear that it is affecting the climate.”

d’Auvergne said the transportation sector accounts for the largest proportion of fossil fuel used in Saint Lucia. As such, he believes people’s attitudes need to change, including resorting to carpooling. Another solution: having bus drivers pool their resources and invest in larger buses which not only reduces on fuel costs and reduces pollution but also saves on maintenance costs.

On Tuesday evening, leaders from across the globe began making their national statements at the High-Level Segment chaired by COP President, SalaheddineMezouar. Many of them called for more decisive action to be taken to achieve the goals set out in the history-making Paris Agreement signed last year which has since been ratified by 190 nations that account for 75% of total global emissions.

In his address in Marrakech, Morocco on Tuesday evening, Saint Lucia’s Prime Minister Allen Chastanet cited Haiti’s continued vulnerability to natural disasters, saying that the financial response after these disasters is not commensurate with the damages experienced.

“The response to these disasters particularly in Haiti have been muted at best with the level of resources committed so far being minuscule in the context of the overall needs,” Chastanet said. “As these impacts manifest themselves in the Caribbean and in other parts of the world, they bear testament to the urgency of the challenges posed by climate change and the need to give full effect to the Paris Agreement.”

U.S. Secretary of State, John Kerry, addressed the High-Level Segment on Wednesday, saying the international community had made many strides in ensuring that climate change was made a matter of priority. He said most Americans understand the implications of the U.S. undoing its efforts in combating actions that contribute to climate change.

“The global community is more united than ever not just in accepting the challenge, but in confronting it with real action, in making a difference,” Kerry said. “And no one should doubt the overwhelming majority of the citizens of the United States who know climate change is happening and who are determined to keep our commitments that were made in Paris.”

Despite U.S. President-elect Donald Trump dismissing the climate change debate as a “hoax” concocted to make U.S. businesses less competitive, Kerry said climate change is real. The U.S. is the world’s second-largest emitter of greenhouse gases after China. During his address, it appeared that Kerry sent a direct message to the next Commander-in-Chief.

“No one has a right to make decisions that affect billions of people based on solely ideology or without proper input,” Kerry stated. “Anyone who has these conversations, who takes the time to learn from these experts, who gets the full picture of what we’re facing – I believe they can only come to one legitimate decision, and that is to act boldly on climate change and encourage others to do the same.”