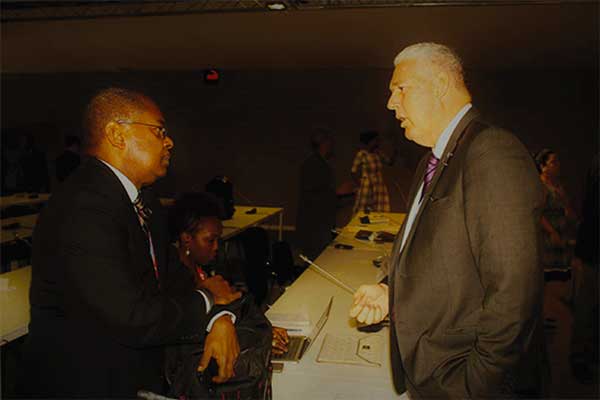 SAINT LUCIA’S former Minister for Sustainable Development, Energy, Science and Technology, Dr. James Fletcher, is concerned that while the ratification of the landmark Paris Agreement on climate change has been a quick process, the implementation process has been slow.

Dr. Fletcher is among the many environmentalists and other concerned entities attending the Conference of Parties in Marrakech, Morocco (COP22) which runs from November 7-18 and attended by nearly 50,000 people from across the globe.

“We had so much momentum coming out of Paris (last December) and I think the concern is that there seems to have been a drop in activity and energy,” Dr. Fletcher told The VOICE on Monday. “This is a process COP, one in which the parties are trying to get the process right for the entry into force of the Paris Agreement, which has happened quicker than many people anticipated.”

Dr. Fletcher, who played a key role in highlighting the vulnerability of Small Island Developing States (SIDS) at last year’s COP21 in France, said the Ad Hoc Working Group on the Paris Agreement (referred to as the APA) that was charged by the Conference of Parties in Paris with the responsibility of putting together all of the issues for the implementation of the agreement was supposed to have concluded its work when the agreement came into force on November 4, 2016, but has not.

Thus far, 109 countries have ratified the Paris Agreement following varying domestic approaches and mechanisms. In Saint Lucia – as was the case in many other Caribbean countries – the ratification process was done at a Cabinet level and did not need parliamentary approval. Saint Lucia ratified the Paris Agreement on April 22 this year as part of Earth Day activities but Dr. Fletcher said the process is a much more complicated one for other countries.

Said Dr. Fletcher: “The COP realizes that it’s a bit unfair to penalize countries that have not ratified the Agreement to date given that this has been an unprecedented rapidity of entry into force and to really give countries a little more time to ratify. The question, however, is how much more time is there.”

Dr. Fletcher said that as an alliance SIDS believe that if the Meeting of the Parties is suspended, it should be suspended to at least next year (COP23) where they can take stock of whether they have the full ratification that they’re looking for and also how much work has been done. If need be, he added, they can then postpone to one year later (COP24) but no further than that. It is one of the procedural issues currently being addressed and taking up much of the Conference’s time.

“Other issues include the Warsaw International Mechanism on Loss and Damage that was supposed to report to this COP; that committee is still working through their own work programme to see whether they can finalize things,” Dr. Fletcher said. “So there are a few little process issues that are being resolved and that’s taking some time. That’s why this COP doesn’t feel like your typical COP. While some work is getting done, if you’re a regular visitor at these COPs, you don’t get the same feeling here as you would at the others.”

Like many other COP attendees, Dr. Fletcher said he would like to see the declaration coming out of COP22 being a bit more forceful than it is right now. He described the “Marrakech Call” put forward by COP President, SalaheddineMezouar, Morocco’s Minister for Foreign Affairs and Cooperation, as being “too benign”. Dr. Fletcher thinks a more comprehensive statement needs to be made.

(“Any declaration coming out of (COP22) needs to really send a strong signal to the international community that we are committed and resolute in our efforts to bend that temperature curve down to 1.5 degrees Celsius,” Dr. Fletcher stated. “(It also needs to state) that we are very committed to mobilizing the finance that is required by SIDS and other climate-vulnerable countries to help them adapt to the impacts of climate change. We think an urgency of action is required. So these are some of the things we’re pushing for in the high-level meeting.”

Fiji has been tipped to take over the presidency of next year’s COP, which will be hosted in Bonn, Germany. It is a good configuration, Dr. Fletcher noted, because it allows countries such as Fiji that would not have the infrastructure and finance to host a COP to assume the presidency. In assuming the presidency, Fiji becomes the first Small Island Developing State to do so.

During a CARICOM Ministerial Meeting held in Marrakesh on Monday, the Bahamian delegation raised concerns over the metrics used by the international community by classify countries and their economic successes on the basis of GDP per capita, which Dr. Fletcher agreed “is not an accurate metric.”

Dr. Fletcher cited Jamaica and Grenada that were hit by Hurricanes Gilbert and Ivan respectively. Those natural disasters accounted for losses of 365% and 203% in GDP respectively almost overnight. Of late, Hurricane Matthew – like other natural disasters — has proven that whatever economic progress would have taken years to achieve can be reduced to nothing in a flash.

“We believe that any metric used has to take into account our vulnerability,” Dr. Fletcher said. “So it is not a good argument that some of our Caribbean territories like the Bahamas and Barbados have graduated to middle income status when they have not. That affects us especially as it relates to determining the budget and who gets funding from the Secretariat to attend these meetings.”