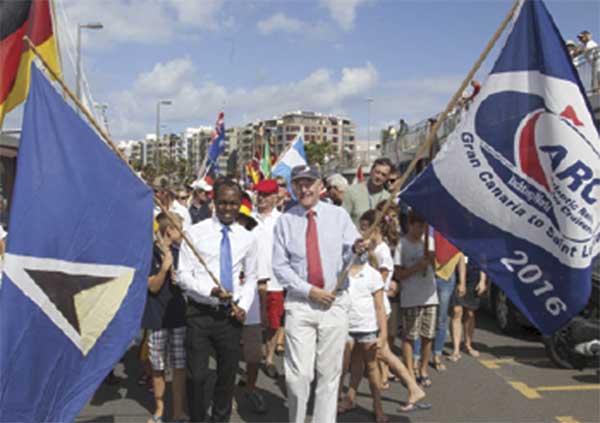 WITH one week to go before the ARC 2016 fleet leaves Las Palmas de Gran Canaria for Rodney Bay in Saint Lucia, crews from the 205 yachts already berthed in the marina took part in the official ARC 2016 opening ceremony. The final 15 yachts are expected to arrive in Las Palmas over the next few days, bringing the fleet total to 220 yachts, for the rally’s 31st edition.

At midday last Sunday hundreds of ARC participants took part in the official opening Ceremony for ARC 2016. Flag bearers from 31 different nations representing the countries of the yachts in this year’s rally joined the procession as it made its way around the marina. The grand parade had a real festival atmosphere and many crews took part in the patriotic display by bringing a boat’s mascot or dressing up for the occasion. Following the principal flags of Spain, Gran Canaria and Saint Lucia, the international conga line was led by the Banda Gran Canaria, with Bateria Samba da Ilha beating a salsa rhythm at the back.

A warm welcome to the ARC sailors was made by Saint Lucia’s Minister of Tourism, Dominic Fedee who promised wonderful hospitality and delicious rum when the crews arrived after their Atlantic crossing, which was met with great applause. He also thanked the people of Las Palmas for over three decades of partnership between Gran Canaria and Saint Lucia during the history of the ARC.

In the first week of ARC activities in Las Palmas, crews have enjoyed daily social events, seminars on cruising topics and the opportunity to plant another 200 trees in the ARC Forest in the mountains above the city. The second week of the pre-start programme is the busiest, as more crew fly in and the yachts start their provisioning and finish off last minute preparations for the Atlantic crossing.

Start day for the ARC fleet is this coming Sunday and thousands of spectators will line the city shore to watch the boats start. The first start gun will sound at 12:30 p.m. for the Multihulls, followed by the Racing boats at 12:45 p.m. and then the cruising boats, making up the majority of the ARC fleet, at 13:00 p.m.

ARC sailors have a choice of routes for their transatlantic crossing to Saint Lucia. One week ago, the ARC+ fleet departed Las Palmas for their first leg sailing to Mindelo Marina in Cape Verde. The first boat to arrive after leading the fleet from day one was Cat’leya (FRA), a Lagoon 62 SporTop who covered the 850nm passage in just over 4 days. The fleet experienced light winds surrounding Gran Canaria for their first day at sea, but strengthening north-easterly tradewinds soon established and rolling waves propelled them towards the Cape Verde islands.

With the exception of Lea who departed late from Las Palmas, the ARC+ fleet will be complete in Mindelo by the end of the day and crews who have arrived over the course of the weekend are enjoying exploring Sao Vicente. The 70 boats in the ARC+ fleet will depart for Leg 2 of their transatlantic crossing on Wednesday 16th November bound for Saint Lucia.