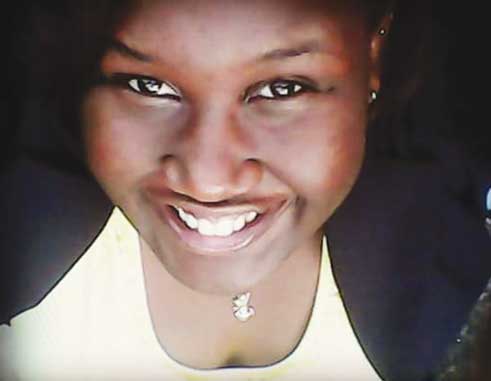 Have you ever been in the presence of someone who triggers your inner Queen Elizabeth II, and you instantly feel the need to speak “properly”?

Well, even though today’s WOTW is one of the sweetest and most down-to-earth people one will come across, her extremely well-known voice will leave you watching your Ps and Qs just for the want of keeping up the standards.

KebaTaliam is a 28-year-old News Anchor/Journalist with Radio St. Lucia and was one half of the female pioneering twosome at Kiss FM.

The Aux-Lyons (Mabouya Valley, Dennery) native has become a household name in radio in St. Lucia with a voice that stands out in an unmistakable form and she oozes class and professionalism.

The radio anchor’s deep yet sultry tone leaves listeners looking forward to the midday news and actually leaves them wanting more, just so that they could hear that voice again.

Her voice is also calming and reassuring, leaving you feeling confident that what you just listened to was the truth and nothing but the truth.

Better still, her voice is quite fitting for her personality as she is an approachable lover of people who is always open to the wonders of their lives and lessons.

She said it comes as no surprise to those who know her as she has a love for reading, as well as a penchant for public speaking and school debates. She has two older brothers who were teachers and she is a former student of the St. Joseph’s Convent where she was surrounded by equally eloquent personalities.

When it came to her voice, the question had to be asked: whether it was authentic and whether it is practiced. She responded by saying: “What I sound like is a natural part of me. Imagine someone asking how you got the complexion you were born with. A bit of head scratching might ensue if you’re to really process that question. My mother, whom I apparently sound like, always insisted that efforts to embrace proper speech were made. I got teased at school in my younger years for the way I sounded, especially by boys with voices at a higher pitch than mine at that time. I was unbothered by it then, and it’s amusing to think of it now. By way of training, I think my love of reading pre-empted my ability to speak professionally. Words always intrigued me with their origins, definitions and pronunciation. I was the child who’d be reading books with a dictionary within reach if I needed clarification on context of a word that was new to me.”

As was expected, Taliam said the praise and recognition that she receives is overwhelming.

The radio personality said: “Over the years, the constant reaction is one of amazement that I sound the same in casual speech as I do on air. I’m always amused by the genuine surprise expressed and never hesitate to confirm that I do indeed sound like me, all the time. In creating connections with people I’ve met over the years, I react genuinely and they respond well to my doing so. My personal philosophy has always been to be respectful to everyone and learn from them what I’m meant to be taught.”

She continued on to say: “Radio presents the interesting juxtaposition of being a public figure while maintaining visual anonymity. You aren’t seen and the focal point is the voice so I understand how having people recognize it becomes a common occurrence. I’ve had individuals come up to me in stores, or when I’m by myself in the supermarket, to my complete surprise. I’ve had strangers greet me just to see if their guesses were correct. I’ve gotten taps on my shoulder on buses, been asked about my work while out in a social setting, you name it. Friends of mine present in these moments find the circumstances quite entertaining as I’m typically oblivious to whether my “voice” is heard outside of a professional setting. At times they volunteer a response to the questions before I get around to it! Through radio, I’ve established ongoing friendships with people I may never meet. One of my favourite examples of this resulted in collaborative broadcasts with Radio Iceland!”

Radio Iceland? Now that’s how you know that you’re doing something right when your voice is known and loved in countries on the other side of the world.

When it came to prying a secret from Taliam, she was a volt. Call her Fort Knox, but eventually, I was able to squeeze something out of her.

As much as she loves meeting new people, Taliam is an extremely private individual and she makes no bones about it.

She said: “It’s an interesting paradox considering my career of choice. However, I like that I’m a bit of a mystery to the average individual.”

Oh yeah, she also has this PSA to put out there: “I’m also available for godmother duty.”
So there you have it, folks, straight from the voice herself. If you’re looking for a “Nenen” for your little one, now you know who to turn to.