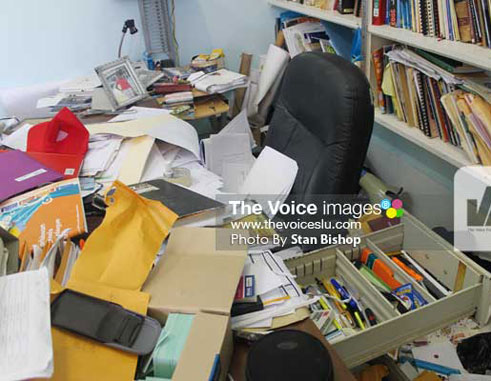 UP to the time of going to press yesterday, no one had been charged for Monday evening’s break-in at St. Mary’s College, the all-boys school located at Vigie.

On Thursday, police reported that they had made some progress in the case following the arrest of three men and the recovery of a laptop belonging to the school.

While the police did indicate that charges were expected to be laid, they were still trying to ascertain whether the three men arrested are linked to a recent break-in at Castries Comprehensive Secondary School.

Police Public Relations Officer, Zachary Hippolyte, told The VOICE yesterday that he could not confirm when or if the arrested trio would be charged. Neither could he confirm whether they were still in custody.

“I’m not able to say unless I call and make a request,” Hippolyte said.

Hippolyte said investigators needed to be given time to conduct their investigations. He said that while he understood the public’s need to know the state at which the matter is at, the police needed time to do their work.

Meanwhile, Hippolyte indicated that while the police continue their investigations in the matter, no official directive has been given as yet to solicit information from the public regarding the case.

Two security guards were beaten, tied up and left for dead by four men who entered the St. Mary’s College compound on Monday evening. The four men subsequently broke into some of the premises’ rooms, including the principal’s office, ransacking them, before leaving with several items, evading police officers who arrived on the scene firing a volley of shots in their direction.

The latest break-in at St. Mary’s College has sparked renewed debate about the safety at schools, with government officials, parents and the St. Lucia Teachers’ Union (SLTU) all agreeing that more needs to be done to address the situation in a systematic manner.