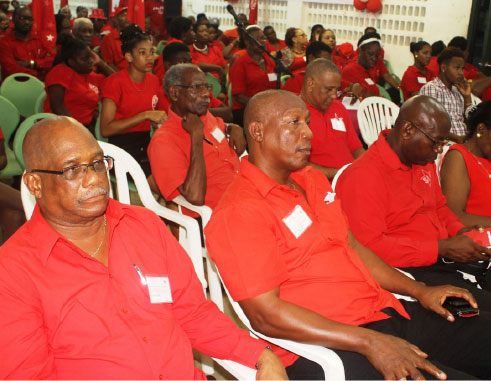 POLITICAL Leader of the Saint Lucia Labour Party (SLP), Philip J. Pierre, told delegates and supporters last Sunday that the party will spend its time in opposition preparing to govern the country again. However, he urged party members and supporters to engage in some serious introspection.

“While we are in opposition, each and every one of us – including the leadership of the party – will have to go into introspection to find out whether we have done all that we had to do so that we ought not to be in opposition today. Each of us has that responsibility to ourselves,” Pierre told the closed session of the party’s Conference of Delegates held at Leon Hess Comprehensive Secondary School.

Pierre, who became Party Leader following Dr. Kenny Anthony’s resignation from the party’s leadership last June, urged delegates to never hesitate to bring to his attention any perceived errors that might have been committed by him.

“I am not perfect, I am nothing near perfection and I may make errors. If I do make an error, it is not deliberate (but) because something went wrong. I’m human,” Pierre added.

Nevertheless, Pierre said the party had “done all the right things” while in government, including managing the economy well. He said the future for the Labour Party is bright and called on party members to not become despondent and feel as though the party was in the doldrums.

He added: “We just had a brief stop: we lost only a war, but the battle against poverty and discrimination continues.”

Pierre said the party will remain focused on building its base in its fight to recapture the seat of government, adding that the party is open to new ideas and aims to set up a system of values that seeks to foster greater support for and from the party. These steps, he said, are necessary in preparation for future governance, adding that the current government “will not last”.

“It cannot last and we must ensure that when it fails, we are ready to do what we have to do to take over the reins of government in our country,” Pierre told the conference.

However, many delegates expressed their disenchantment on Sunday, venting their disapproval of what they perceive to be the party’s neglect of its core base in favour of a selected few during its last term in government. Sounding somewhat conciliatory, Pierre assured delegates that the party will be working to correct these perceptions.

“Going forward, the Labour Party will be about servant leadership. We will not be at the top dictating to you what we want. We’ll be listening to you and you’ll tell us what you want. But you must set the example and we will follow,” Pierre told the delegates.

SLP’s General Secretary, Leo Clarke, told The VOICE that the closed session, was mandated to elect an executive, which resulted in two new people assuming office: Vice-Chairman Emma Hippolyte replaces Virginia Albert-Poyotte and the position of Assistant General Secretary has been filled by Herbert Roserie, who unsuccessfully contested the Micoud North seat in June.

Other members of the SLP executive include Party Chairman, Claudius Francis, and Treasurer, Errol Charles.

Clarke said delegates expressed “great enthusiasm” in undertaking the theme of the conference – “Mobilize! Organize! Consolidate!” – including doing the necessary work in their respective constituencies to put things in order.

“Some deficiencies and approaches that we’ve had have been highlighted, a resolution which calls for certain amendments be made to the party’s constitution was presented and that a review committee be put together and report to the next annual conference,” Clarke explained. “So I think that the tone and mood of the conference has been good.”

All 17 constituencies were represented by their delegates at Sunday’s closed session, Clarke said. However, as was the case at the open session held in Vieux Fort a week earlier, Dr. Anthony was not in attendance as he was still recovering from a medical procedure.

“He went out for a particular medical reason that has to do with his eyes. So I’m assuming that he will have to go through a period of rest before he gets back into active party politics,” Clarke said.

When asked to comment on morale within the party, Clarke told The VOICE that despite being committed to the party, members feel changes need to be made to make the party more efficient, effective and viable.

“These are people who still very much believe in their party but would like to see changes made to make the party more efficient, more in line with the demands of the changing political environment and to bring the party into a state of readiness for the next general elections,” Clarke said.

He said that while the party has been criticized for not being more forceful in keeping the government in check, a balance must be struck, including the Labour Party allowing the government to settle down. Nevertheless, he said the party will continue to speak out on key issues, citing an alleged case of victimization by the government.

“There’s a new wave of victimization that has started concerning the drivers who transported schoolchildren. Over forty of them, claimed to be supporters of the Labour party, have been dismissed. The government had promised that they would increase on the number of buses, not dismiss people who already had those contracts. For some of those people, that’s their livelihoods on which they depend to feed their children,” Clarke said.

“(This) is good; we need to really analyze, vent and focus on the last year we’ve had and to chart a new course moving forward,” Dr.Hilaire told The VOICE. “We’re going to have a review of the (party’s) constitution and there’s a lot of discussions about some of the things we need to correct and do to appeal to our support base, being more efficient and focused as a party and learning some of the lessons of being in government and to correct those mistakes the next time we get into government.”

Dr.Hilaire, who previously served on the party’s executive from as far back as 1997, said a new way for the party needs to take into account the party’s June 6 loss at the polls and how it practices governance. He said the party needed such a forum to “just exhale and let a lot of the feelings we’ve been harbouring to be released.”

“A lot of our party members are expressing those views, saying in their own words, what they think were some of the issues and what we need to consider moving forward. Of course, beyond your members, you have supporters, and it’s very important to listen to supporters as well because they really make you win elections in terms of numbers,” Dr.Hilaire explained.

According to Hilaire, issues raised by delegates at the conference included how the party handled its supporters, what issues were deemed priorities at the time the party was in office, and how the party conducted its election campaign. He said Sunday’s exercise was crucial so as to find out from party members and supporters where they felt errors were made and what measures are needed to correct them.

“There is going to be a very extensive review of the last general elections shortly that will probably bring forward a more authoritative and definitive assessment of what happened,” Dr.Hilaire said.