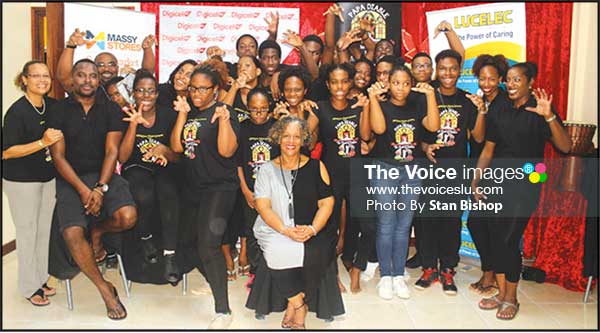 THE KiddiCrew Theatre Company is getting set to send some shivers down the spines of its audience this festive season with the staging of their production, “Papa Diable: The Devil at Christmas”.

The production, which is being held in partnership with the Cultural Development Foundation (CDF), is based on the works of playwright Roderick Walcott, the late twin brother of Nobel Prize-winning poet, Sir Derek Walcott, and will be directed by Mellisa Stacy Giddings.

Dates for the production are November 3 and 4 from 8 p.m. each day at the National Cultural Centre. Tickets are available at The Yard, Gros Islet, KiddiCrew Theatre Company or by calling Frederick at 584 2074.

At 1:30 p.m. on November 4 here will be a special performance for the Theatre Arts students from the secondary and tertiary schools.

Producer of KiddiCrew Theatre Company, June Frederick, said she does not recommend that children under 13 attend the show since the play, which she described as “fantastic”, is expected to “frighten the living daylights out of everybody.” Nevertheless, she encourages people to witness the celebrated playwright’s work come to life.

Last year, the theatre company began its three-year series with “The Legend of Tom Fool” — also by Roderick Walcott – which received immense positive feedback. With more sponsors coming on board this year, Frederick said the upcoming production promises to be nothing less than stellar.

“For us at LUCELEC, foundations are important…We see KiddiCrew continuing the development of our local art forms and culture and ensuring that the foundations that have been laid by our greats of yesteryear can be sustained and developed through these young people coming through the system,” Joseph said at a recent press launch for the event.

Massy Stores’ Divisional Head of Marketing, Sariah Best-Joseph, said, “At Massy Stores, youth development is a strong area of focus. We understand that when you invest in the youth, there is much that can be realized.”

“Everything that KiddiCrew represents is directly aligned to two of our core sponsorship philosophies which are cultural development and youth development,” said Digicel’s Marketing Executive, Louise Victor. “So for us this is beyond a sponsorship agreement – it’s more of a partnership.”

KiddiCrew Theatre Company was formed in an effort to continue the Folk Research Centre’s revival of Saint Lucia’s traditional masquerade. Its latest endeavour aims at bringing Walcott’s works back to the stage by staging one play per year for five years. Its cast comprises students between 8 and 10 years old.