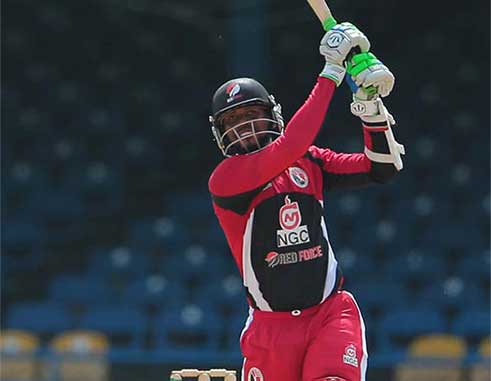 KARUNEGALA, Sri Lanka,CMC – Opener Kyle Hope stroked a sublime hundred and Chadwick Walton, Assad Fudadin and Rovman Powell all chimed in with half-centuries as West Indies A ran riot against Sri Lanka A to post a crushing 109-run victory in the second unofficial One-Day International and clinch the three-match series here Thursday.

Opting for first knock at the Welagedara Stadium, the Caribbean side savaged the Sri Lankan bowling to pile up 347 for nine off their allotted 50 overs.

Hope carved out 109 off 110 deliveries, opening partner Walton smashed 70 from 57 balls, Fudadin chipped in with 57 from 70 balls while Powell produced a sensational late blitz with 52 off a mere 22 deliveries.

Only off-spinner ShehanJayasuriya survived the carnage to emerge with four for 54 from his nine overs.

In reply, Sri Lanka A were powered by Jayasuriya’s better than run-a-ball 119 but never properly recovered from a shaky start and were dismissed for 238 in the 43rd over.

Charith Asalanka struck 44 and DasunShanaka, 32, as Powell completed a fine all-round performance when he picked up three for 44 to limit the hosts.

Energised from their 165-run victory in the opening game on Tuesday, West Indies produced a magnificent start when Hope and Walton put on 111 off 109 deliveries for the first wicket.

Both right-handers, Hope counted ten fours and four sixes while Walton bludgeoned 11 fours and two sixes in a rapid innings.

Walton belted three fours in the second over of the day bowled by seamer KeshanWijerathne and he and Hope then combined to take 18 from the next over from the right-armer, the fourth of the innings.

Jamaican Walton raised his half-century off 47 deliveries before celebrating with three back-to-back boundaries off off-spinner DanushkaGunathilaka, in the bowler’s second over which leaked 12 runs.

When Walton perished in the 19th over, bowled by Test left-arm spinner MilindaSiriwardana, two key partnerships served to further galvanise the innings.

Hope added 109 for the second wicket with Fudadin before Powell joined the left-handed Fudadin to put on a frenetic 66 for the fourth wicket.

The 28-year-old Hope reached his second successive half-century off 64 deliveries when he struck seamer DasunShanaka for four and then motored to triple figures off 41 balls.

He reached the landmark in style, clearing the ropes with Shanaka in the 35th over.

Hope and Andre Fletcher (3) fell in the space of 18 deliveries to leave Windies A on 228 for three but Fudadin and especially Powell, then got stuck into Sri Lanka A’s bowling.

While Fudadin struck a four and two sixes in a measured knock, Powell batted with gay abandon to lash two fours and six sixes en route to his second successive half-century.

In left-arm seamer Binura Fernando’s seventh over – the 42nd of the innings – which cost 24 runs, Powell clobbered three sixes and a four, and a six in each of the next two overs saw him to his fifty off just 20 balls.

All told, West Indies gathered 113 runs off the last ten overs of the innings.

Facing a massive task, Sri Lanka A stumbled early when Beaton bowled SandunWeerakkody with the second ball of the innings without a run on the board, and then had Gunathilaka caught at the wicket for one in his next over with the score on ten.

Jayasuriya, who counted 11 fours and two sixes in a 113-ball innings, put on 88 for the third wicket with Asalanka to steady the innings.

But once Asalanka was run out in the 21st over, Sri Lanka A lost four wickets for 61 runs to decline to 159 for six in the 30th over, and Jayasuirya’s 70-run, seventh wicket partnership with Shanaka proved in vain.