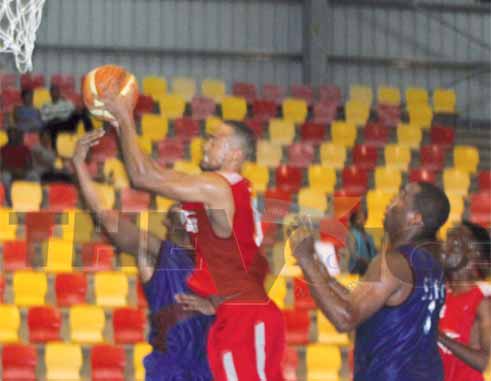 THE Beausejour Indoor Facility will come alive this Saturday for an anticipated mouthwatering final matchup between the 2014 and 2015 KFC Commercial Basketball League champions.

Defending champions, the Goddard Group, will play the Saint Lucia Fire Service from 8:00 p.m. in what is expected to be a thrilling final. However, the Royal Saint Lucia Police/Combined Forces and ECFH/BOSL will square off in the third place matchup at 6:00 p.m.

The past weekend saw the completion of both the quarter- and semifinal stages of the tournament at the same venue.

In the first game of Friday’s double header, the RSLPF Combined Forces pulled off a late game surge to defeat the Media Ballers 56-50, securing a spot in the semifinals. Despite leading by as many as 22 points in the 2nd quarter, early foul trouble for power forward Paul Hippolyte coupled with a 3-point third quarter played a major role in the defeat of the Media Team.

The KFC Player of the Game was Durocher Antoine with 11 points, 4 steals and 4 assists. Media Ballers’ Arthur Lisson contributed 14 points, 10 rebounds and a dismal 10 turnovers.

The second quarterfinal matchup for the night saw the Saint Lucia Teachers Union miss out on their bid at securing a spot in the semifinal, losing to Peter and Company Distributors/Goddard Group. Brothers Andre and Troy Louison’s onslaught paid off as they secured a 70-52 win for the defending champions.

Troy Louison, KFC Player of the Game, raked in 21 points, 15 rebounds, 5 steals and 5 assists, while his brother Andre contributed 24 points, 7 rebounds and 8 steals.

For the Teachers, Mervin Augustin came up with 13 points and 10 rebounds.

The first of Saturday night’s semifinal games saw the undefeated Saint Lucia Fire Service deliver a 22-point thrashing of ECFH/BOSL, winning the matchup 72-50. The 2014 champions continued their dominance exhibited throughout the 2016 tournament, clinching a berth in the final.

The RSLPF Combined Forces had their hands full trying to contain the Louison brothers in the second semifinal game. Goddard Group pulled away from the Police in the fourth quarter, thanks to crowd-awing performances by the brothers landing them the remaining spot in this weekend’s final game with a 75-66 win. Co-Players of the Game Andre and Troy Louison raked in 31 points, 14 rebounds and 5 assists, and 27 points, 9 rebounds, 4 steals and 6 assists respectively.

For the Police, Durocher Antoine chipped in 16 points and 4 steals.