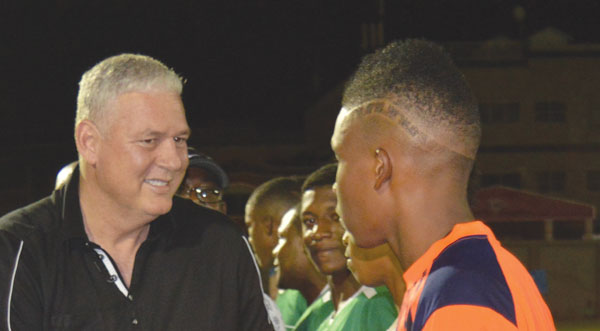 The Phillip Marcellin Ground will come alive with the staging of the semifinals dubbed “Fantastic Four Saturday” in which the semifinalists will battle it out for the final two spots.

The action begins from 6:00 p.m. when Marchand play Gros Islet followed by Canaries coming up against home team Vieux Fort South at 8:00 p.m.

Meanwhile, for those who thought Gros Islet pulled off a fluke when they defeated Soufriere in their opening encounter 1-0 at the Soufriere Mini Stadium in what was considered a revenge matchup between the two sides, knocking them out of the tournament, think again.

On Saturday evening, an experienced and talented Gros Islet team proved they are for real; this time around their victims were Mabouya Valley. Once again, Gros Islet relied on a strong first half in which they totally dominated play.

Gros Islet opened the scoring via a penalty shot from Everton Lambert in the 6th minute. Troy Greenidge made it 2-0 in the 18th minute and Aramis Lorde extended the lead by another goal in the 20th minute (his second of the tournament).

Mabouya Valley’s Vernon Abbott pulled one back in the 23rd to make it 3-1, while Gros Islet’s Eden Charles capitalized on a defense blunder in the 34th minute to seize the halftime advantage with 4-1.

On the resumption, Gros Islet quickly moved into high gear as Eden Charles scored his second goal in the encounter in the 48th minute. There was no letting off the hook for Mabouya Valley as Nicholas Lawrence joined the goal scoring spree in the 55th minute to make it 6-1.

By then the writing was on the wall for Mabouya Valley and a spot in the semifinal round for Gros Islet. Despite the humiliation, Mabouya Valley still had some zeal and encouragement when Sherwin Simon’s right foot shot eluded the Gros Islet goalkeeper Randy Poleon in the 65th minute. Final score: 6-2.

In the second encounter between defending champions Micoud and home team Vieux Fort South, the expectation did live up to the hype as both teams went at each other with referee Leo Clarke in charge.

From the first whistle, Micoud missed out on a tenth second scoring opportunity that hit the cross bar to the dismay of their fans. Both teams looked evenly matched, but their ability to score left a lot to be desired as they squandered numerous scoring opportunities thereafter. At the halftime whistle, the score-line remained at nil-all.

On the resumption, the Vieux Fort South team pulled all stops as they opened the scoring to the delight of their fans with a goal by Antonius Myers in the 62nd minute. The defending champions never allowed their shoulders to drop as they regrouped with a goal of their own when Tremaine Paul struck a beautiful free kick from 30 yards out to level the score at 1-1.
Vieux Fort South was soon down to 10 men after Jervic Mc Farlane was shown a red card in the 65th minute and the scores locked at 1-1 in regulation time. The game went into extra time, and Micoud took the lead through Dwayne Mason’s goal in the 105th minute.

However, Vieux Fort South never gave up and with their home support behind them were rewarded with the much-needed equalizer when Gregson Edward scored in the 117th minute to make it 2-2.

The atmosphere inside the PMG was electrifying as the loud noise could have been heard in the distance as it was now down to the dreaded penalty shoot-out. Vieux Fort South goalkeeper Leon Alexander came up with two big saves on the night as he denied Micoud’s Travis Thomas and Shawn Evans any scoring opportunities and assured his team their second semifinal berth in the tournament’s history with a 4-2 win.