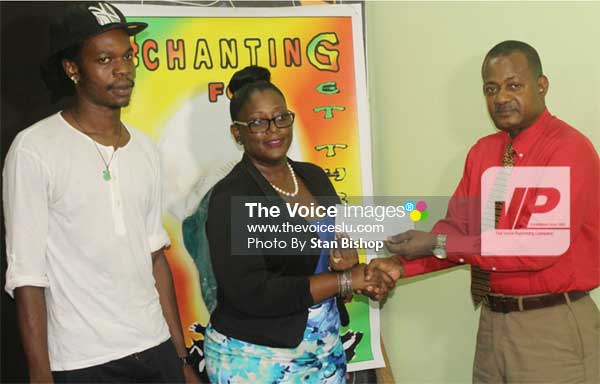 Share this post
RELATIVES of the late calypsonian and Take Over Tent (TOT) leader, Cyril “Get Through” Felix, on Tuesday received a cheque for $9,000 to defray expenses associated with his medical bills and funeral arrangements.

Felix died on October 12 from cancer while a benefit concert was being held in his honour at the National Cultural Centre to raise funds for his treatment. He had been hospitalized on several occasions since falling ill in August.

Chairperson of the Chanting for Get Through Committee, Mac Stephen “Lord Help Me” Aubertin, presented the cheque to Felix’s daughter, TelcarLissa Forde, and son, Amman Crafton. That figure, he said, represented 60% of the gate receipts from last week’s concert.

The presentation was held in the Carnival Planning & Management Agency’s office at Barnard Hill.

Aubertin said the ‘Chanting for Get Through’ benefit concert proved a successful venture in raising funds to defray the late calypsonian’s expenses as well as establish an artist endowment fund so that other calypsonians can benefit whenever they are in need of medical assistance.

“We’re hoping to establish the fund in the next month or so. It’s just a matter of getting the right people on board — such as trustees, lawyers and ECCO – to ensure that it’s done in a manner that there will be no reproach…We want to ensure that it’s a fund that will be established in the right way for the benefit of our calypsonians,” Aubertin explained.

Forde expressed her family’s gratitude to everyone who was involved in organizing the event and rallied behind Felix and his family before and after his death. She said her father’s death came just weeks after another death in her family.

“I lost my mother three weeks ago and lost my father afterwards, so it’s kind of hard,” Forde said. “But I’m getting strength from the Almighty. My brothers and sister are holding on strong.”

Forde indicated that funeral arrangements for her father are being finalized and a date should be announced shortly.

Felix’s career in calypso began in 1981. One year later, he co-founded the Take Over Tent with fellow songwriters Truscott “Sookou” Augustin and Trevor “Jah T” Anthony. Among his popular songs are “What De People Chanting” and “Marchand Posse”.