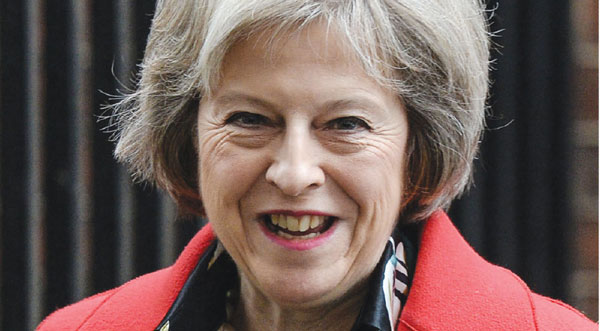 LOOKING me straight in the eye she said: “My name is Theresa May and I’m the best candidate for the job”; with her bold and self-assured opening statement and slightly nervous delivery the then young political hopeful, husband beside her, was at the beginning of her career. She wanted the Barking Constituency Conservative Party Selection Panel to believe in her. It was the end of March 1994 and I was chairing the Committee tasked with choosing the person to succeed me as the Constituency Parliamentary Candidate, a new candidate and one who would have to go straight into a by-election, less than two years after I last fought the seat.

Theresa May was on the move. It was a journey that would see her lose the by-election, but be returned as Member of Parliament for the safe seat of Maidenhead in another two years. That career would reach its zenith upon entering Downing Street 23 years later as Prime Minister of the United Kingdom of Great Britain and Northern Ireland.

That striking opening sentence with which she introduced herself in 1994 was the same one she delivered in July this year in front of her Parliamentary colleagues, throwing her hat into the ring at the launch of her bid to replace David Cameron at 10 Downing Street, after his sudden resignation from the top job in British politics.

She may not have been able to promise any of the above, but there was no doubt that she was going to do whatever it took to give each of those lofty ambitions her best shot.

Of course none of us in that room believed she stood a chance of being elected as the local Member of Parliament in the by-election. She was going to have to fight a rock solid seat held by our opponents for generations. Nor did any of us believe that she was there for that reason, Parliament, the Cabinet room and Downing Street were only six miles away as the crow flew, but in reality however hard she fought, the electorate were going to fight back harder!

By the time Theresa May made her opening pitch to the Panel her instinctive tenacity for positioning was clear. She had made sure that nothing would be left to chance. That trait is part of her DNA, it is used to ensure that she gets what she wants.

To succeed before the Barking Constituency Panel in East London back in 1994, the candidate had to be Eurosceptic. In 2016 the Candidate who was going to succeed David Cameron as Prime Minister had to be the same. The UK had just voted to leave the European Union and Conservative MPs were not about to endorse someone who would not see the job through. She played a clever hand during the EU referendum by staying out of the fray and letting events play out around her, but with the fall of Cameron she made her move.

“Brexit means Brexit” Theresa May declared once the result was already known. There was no going back, she confirmed. Then she appointed the leaders of the Leave Campaign to key Cabinet posts, having first snatched the crown for herself. Boris Johnson became Foreign Secretary and two new secretaries of state and two new departments were included in Cabinet for the first time. One for Brexit and one for international investment and trade.

Her new government hit the ground running and immediately started looking to the future. The dire predictions of the so-called “experts”, the portents of immediate economic fall-out, had proved to be ill-founded and discussions on new trade alliances commenced at once.

President Obama’s warning that the UK would have to wait behind the EU to negotiate its own trade deal seemed less ominous due to Obama’s rapidly expiring mandate and the unravelling of the EU/US Transatlantic Trading and Investment Partnership (TTIP). This was meant to be the engine behind a new competitive Europe, a partnership between the world’s two biggest economic blocs.

But things came to a head on 8 September when the remaining 27 member states of the EU could not reconcile their competing demands and the French Trade Minister Matthias Fekl declared that the “the EU/US Trade deal is dead”. Suddenly the queue to a bi-lateral deal between the US and UK looked a lot shorter and what President Obama had been saying the week before seemed even less threatening.

In Saint Lucia there have been understandable concerns as to what a new Prime Minister and the new post-Brexit economics will bring in terms of Saint Lucia/UK trade. These have been principally based on what can happen to the UK markets if this decision leads to economic stagnation and retraction, or a long-term weakening of the UK currency.

But the long-term strategy of Theresa May’s Government, indeed its only option, is to expand, develop and introduce new trading opportunities and not retract and restrict. People have asked what effect Brexit will have on import arrangements for bananas and if future grant-aid allocations may also be reduced. But Britain is not going to stop eating bananas just because it is no longer part of the EU. It was the EU that hastened and insisted upon the ending of tariff subsidies that itself almost killed-off the industry completely on this Island.

The current £300m of grant aid to the region will be unaffected and future funding will depend as much on how effectively the current round has been put to use by the recipients, as anything else. Indeed, early indications are that the way in which Britain’s significant foreign aid budget is allocated will be revised. Since most of this has historically been tilted away from the Caribbean, there are grounds for cautious optimism.

Theresa May has rewritten the agenda and priorities for the UK. The move is now away from the shot-gun-wedding partners of the EU to the major economic global markets and our traditional base, which includes the Commonwealth.

The British Prime Minister is a cautious operator, not prone to risk but she has determination. Once she has set her path she will stick to it, having first listened to the arguments for and against. There will be no wild oscillation or u-turns as she believes they lead to uncertainty and instability. The fact that she survived in the role of Home Secretary, a political graveyard for many top politicians in Britain, becoming the longest-serving Home Secretary in 50 years is testimony to her tenacity.

The daughter of a vicar and a practising member of the Anglican Church, she is no peacock (“it is right that we don’t flaunt these things here in British politics”), she deplores show in place of substance although paradoxically she has an uncharacteristic love of kitten heel shoes and designer outfits and chose a lifetime’s subscription to Vogue as her luxury item to take if she were ever stranded on a dessert island.

Mrs. May has Type 1 diabetes which means she must inject herself with insulin at least twice a day for the rest of her life, she is often difficult to communicate with and abhors small talk and certainly lacks the charisma of her predecessor, David Cameron. A sense of humour scores low on her list of attributes. In fact it doesn’t score at all.

For Saint Lucia and for the rest of the Commonwealth there is now a window in which to re-define political and trading relationships and to move forward. The new High Commissioner to London will find a change in landscape and with skill will make the most of the prospects that this offers.

(John Kennedy writes in a personal capacity for THE VOICE. He is the President of the British Caribbean Chamber of Commerce Saint Lucia and the founder and CEO of Boka Group).