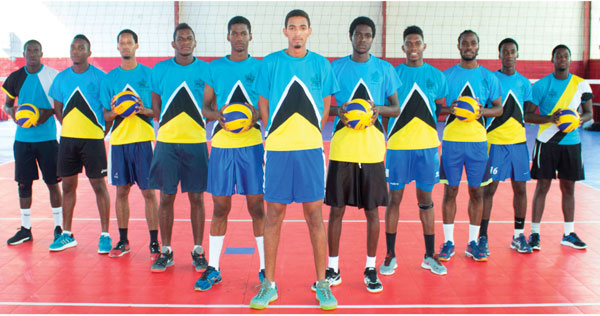 ST. LUCIA will play their second match today in the third edition of the Under – 23 Pan American Volleyball Cup in Guanajuato, Mexico when they meet Chile. The home team opened their campaign yesterday against Argentina. Up to press time yesterday there was no word as to the outcome of that encounter.

In 2015, Saint Lucia Beach Volleyball players made history by participating in Pan American Games in Toronto. Now the Under – 23 male indoor players will be adding their names to the history books.

While in Mexico Team St. Lucia will be under the watchful eyes of head coach Kendell Charlery, Elvin Germain – (assistant coach) and Jean Morille (manager).

aint Lucia is in group B with Argentina and Chile. Other countries in the tournament are Cuba, the Dominican Republic, Guatemala, Panama, Colombia and host country, Mexico. Matches commenced on Sunday, 4 September.
The top two-ranked teams among the pool winners will advance directly to the semifinals and the lowest- ranked pool winner will compete in the quarterfinals with the three second place finishers.

Cuba is the current champion of the U23 Men’s Pan American Cup having won the 2014 edition held in Havana with a straight-set victory over Mexico. Brazil claimed the gold medal in the inaugural event held in Langley, Canada with a victory in consecutive sets over Argentina.

Meanwhile, head coach Kendell Charlery expressed his joy at the opportunity of participating at this high level tournament. Charlery sees this as an opportunity for Saint Lucia’s Volleyball and a step in the right direction. He believes the team will give a great show in this tournament experience to go on to play at the Olympic Games and the Commonwealth Games respectively.