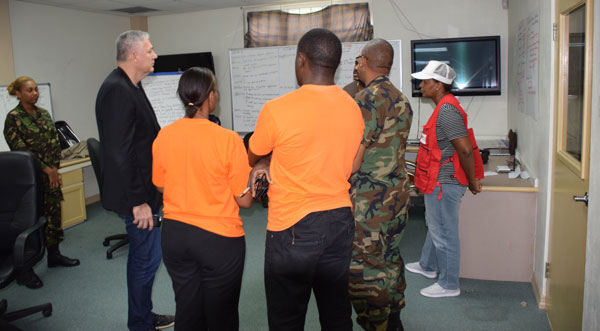 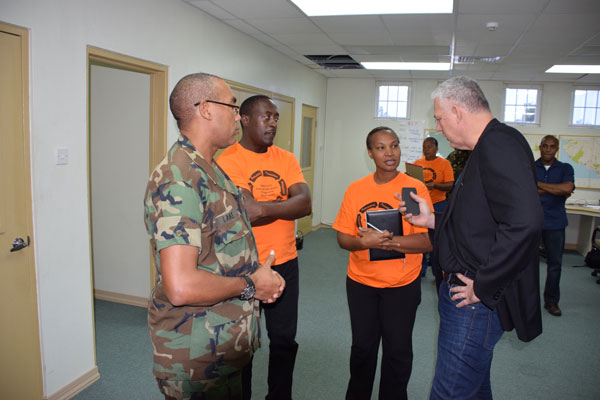 Prime Minister Honourable Allen Chastanet’s first priority when he arrived home Thursday afternoon was to get an assessment of the situation in Saint Lucia following the passage of Tropical Storm Matthew which brought with it heavy rains and wind on Wednesday evening.

Prime Minister Chastanet first met with the National Emergency Management Organization (NEMO) where he was briefed on the emergency response and presented with a preliminary damage assessment.

“I am very satisfied so far in terms of how things have been handled,” said the Prime Minister. “I have also asked NEMO to provide a report on where there have been some shortcomings so we can fix this going forward. I am also very grateful to the Lord that we had no deaths related to the storm.”

The Prime Minister also offered his condolences to the government and people of Saint Vincent and the Grenadines where one life was lost.

“I spoke to Prime Minister Ralph Gonsalves this morning, as he was also out of the country and we were both trying to get home and definitely our prayers and sympathy go out to the family and the Government and people of St Vincent.”

At home in Saint Lucia the Prime Minister said based on his briefings so far the Agricultural sector had been most affected by the storm.

“I want to reassure the farmers that we will be reinvesting in the sector,” said the Prime Minister. “We want to get this sector going as soon as possible. I am grateful that we made the trip to Morocco recently and were able to secure extra fertilizer so that shipments are already on the way and there are a series of more shipments to come to be able to assist us.”

Ahead of a full assessment it is estimated that 85 percent of the sector has been damaged.

“This is another lesson for us,” the Prime Minister said. “Even in this situation it takes a while to mobilize resources. We have got to run a surplus government. We have to build up a reserve of money so we can start providing our own insurance and have the capacity to take care of ourselves.

We need to keep strengthening our efforts and recognize that this is going to happen more frequently. Even when it comes to agriculture, we have to build a sector which is a bit more resilient to natural occurrences. As morally correct as we are that we are not the cause of all these problems we can’t continue to sit here and wait on the benevolence of others.” 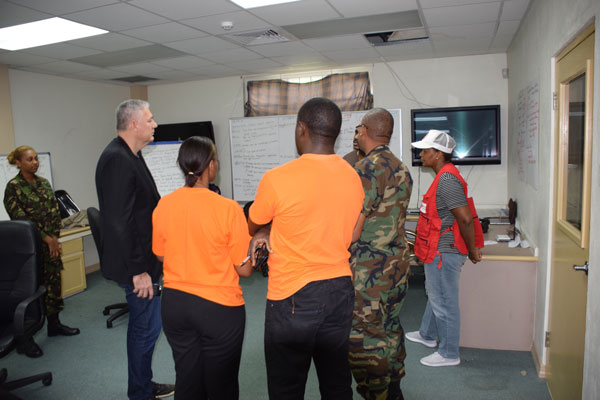 The Prime Minister noted the quick recovery efforts especially when it came to clearing of the roads and airports.

“We are thankful that the airports are back in operation,” noted the Prime Minister. “We only lost one international flight today which was cancelled. We are hopeful that there will be two flights tomorrow.”
The Prime Minister noted that Tourism Minister Dominic Fedee was presently in Puerto Rico along with some SLASPA and Tourism officials and they have been keeping tour operators abreast of the situation in St. Lucia. In terms of electricity the Prime Minister also received a briefing from Lucelec who explained that electricity should be 90 percent restored by later this evening.

“The challenge will be the water sector because you can’t start the pumps until the electricity is restored,” said the PM.

“We also have to assess the intake areas so it may take a little longer for water to come back on stream. We are making sure that NEMO has access to bottled water to distribute to persons who need it.”

The Prime Minister and NEMO also announced that schools will remain closed on Friday September 30th 2016 in order to ensure full recovery and safety.

“We still want to ensure that the traffic situation is manageable and to give emergency personnel and the ministries time to do their assessments,” noted the Prime Minister.

Finally Prime Minister Chastanet said that he was “thankful to the SSU for an outstanding job.”
“Not only after the storm but during the storm and also leading up to the storm, the SSU managed the situation. I must commend the decisions of NEMO and the Acting Prime Minister Lenard Montoute to shut schools and declare a half-day on Wednesday.

These were good decisions that helped make sure that no lives were lost and it helped people to secure their homes. The next 72 hours are crucial and we have to make sure we are all on the same page in terms the priority areas,” said the Prime Minister.

Following the initial meeting the Prime Minister met with members of the Cabinet of Ministers, the Leader of the Opposition Philip J. Pierre, permanent secretaries from some of the various ministries and representatives from Lucelec, Wasco and NEMO for a more thorough presentation.