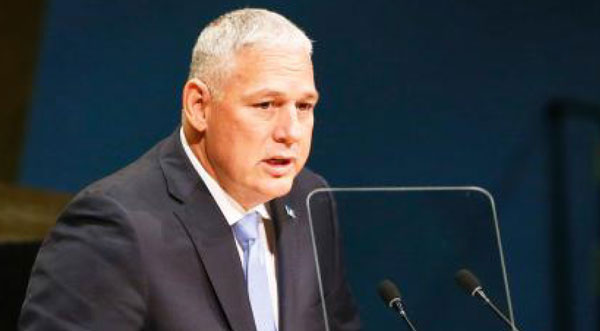 Prime Minister Allen Chastanet, delivering his first address to the United Nations General Assembly (UNGA) since he became head of government in June this year, said that there is no doubt whatsoever that there are many challenges within the international community.

“But the majority of our challenges, at their most basic, are symptomatic of a single underlying issue: the denial of access to basic human rights, including education, health-care, justice, and security,” he said, noting the need to “accept that these pillars are fundamental human rights and as such are the very foundation upon which we must grow our nations.

“Our failure to provide and guarantee these rights in crucial areas of life to our citizens, breeds challenges that mushroom beyond national and regional borders and impacts us all in the global community.”

Chastanet said every year world leaders gather at the UNGA to deliberate on the challenges and successes of the international order.

“Yet, the very format is contradictory, as while many speak, few stay around to listen; far less respond. Then we wonder how and why this entity is so negatively perceived by the persons we are elected to serve.

“As a small island state within this body, our voice is meant to be equal, but long experience and real politik prove the contrary. Instead of being invited to participate in finding a cure for the cause of our challenges, we are forced to accept remedies to the symptoms of the maladies.’

He told the UNGA that given “our small size and limited choices for economic expansion, small island states like my own have looked to the more advanced economies for innovative means of economic development.

“We have adopted programmes created by these states, such as Citizen by Investment Programmes, Financial Services and Trusts. Yet we find ourselves being penalized and criticized by the very architects of these programmes as they brand us as tax havens and compromise our ability to grow our economies. We are left to dance between the raindrops.”.

Chastanet said that a painful example of such exclusion is the inescapable fact that while the small islands continue to feel the negative effects of the 2008-2009 global financial and economic crises, they are not involved in the solutions to the problems.

“As you know, the G20 has designated itself the forum for our collective international economic cooperation. However, St. Lucia, like the majority of the member states of the United Nations, is not a member of the G20 nor were we consulted on its appointment as the arbiters of our economic fate.”

He said the G20 also has a serious legitimacy problem.

“Aside from being unofficial and non-inclusive, many of the countries at the table represent the champions of the economic and financial systems and policies that led the world into the crisis, in the first place.

“The crisis has produced in our states, increased poverty, suffering and social and political upheaval. Its disproportionate impact on the poor has only widened the gap between developing and developed countries.”

Chastanet said that every single member state of the UN should be honest in shouldering its responsibilities.

“Nothing is easier than blaming others for our troubles, and absolving ourselves of responsibility for our choices and our actions. True leadership in this new world order demands much more. We must bring ourselves in tune with the call of the times.

“We say our destinies are interlinked as we have all adopted a universal approach to sustainable development through the Sustainable Development Goals; but we still think in terms of the zero sum game. The truth is that we have been endowed with abundant natural resources, which, if put to proper use, could wipe out poverty throughout the world.

“There is therefore no need to continue to create a world order that elevates one nation or group of people over another.”

He said the global community share a common future and “no longer do we have the luxury of indulging our differences to the exclusion of the work we must do together. The magnitude of our challenges has yet to be met by the measure of our actions.

“The United Nations was founded on the belief that the nations of the world could solve their problems together. It was rooted in the hard lessons of war; and rooted in the wisdom that nations could advance their interests by acting together instead of holding steadfast to our insular policies.

“The time has come for the world to move in a new direction. The Technological Revolution of the 21st century is creating a new global village. We must embrace a new era of engagement based on common needs, innovative ideas and mutual respect …… And that work must begin now,” he told the UNGA.