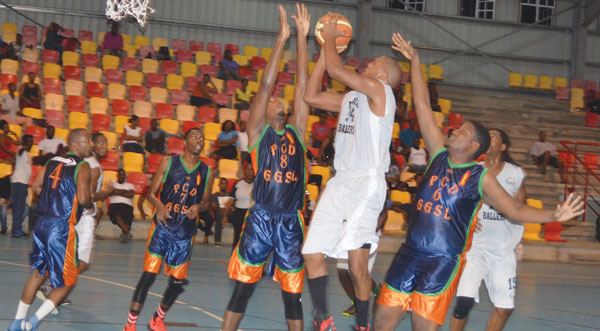 ONE game is on the card for tomorrow evening as the group stage match-ups continue in the Commercial Basketball League / Kentucky Fried Chicken tournament. From 7:00 p.m., FLOW will take on Insurance All Stars at the Beausejour Indoor Facility.

Over the weekend, there was another exciting round of matches. On Saturday evening, Windjammer went down to BOSL / ECFH 88 – 46. KFC Player of the Game, Kurt Hyacinth, led the way for BOSL / ECFH with 26 points, 6 steals, 3 assists; Shamoir Jn. Baptiste also contributed 15 points 3 steals, 4 assists to the win. For Windjammer, Triston James scored 26, points 8 rebounds, 6 steals (including 14 free throws).

On Friday evening, Digicel 4G Ballers defeated the 2015 finalists Sandals High Risers 84 – 76. Digicel led by as much as 27 points in the first half.

A second half turnaround for Sandals, including a 29-point 4th quarter, was not enough to overcome Digicel, led by KFC Player of the Game, Carlos Solomon’s 34 points. Kiyanni Elwin led the High Risers with 27 points, 4 steals and 6 assists.

Described as the final before the final and for the many supporters who turned out to take in the action will agree it was a thrilling matchup between the Media Association and Defending Champions Peter and Company Distributors which went down to the wire.

PCD was heavily favoured to win, which they eventually did, but had their work cut out for them. The momentum was definitely on the side of the Media Ballers who led by as many as 16 points through the first 25 minutes of the game. But a relentless attack by brothers Troy and Andre Louison cut their lead to 44 – 42 at the end of the third quarter.

On the resumption, the two teams traded baskets (and turnovers) during the fourth with a tied score of 62-62 with less than 30 seconds to go in regulation time.

A lay-up by KFC Player of the game, Andre Louison, leaving 13 seconds on the clock, put PCD up by 2 and sealed the Media Association’s fate as guard Valentine Dantes was not able to convert a rushed lay-up attempt.

Andre Louison scored 28 points, 11 rebounds, and 4 steals, while his brother Troy chipped in with 20 points, 9 rebounds and 4 steals.

In a losing effort for the Media Ballers, Elijah Williams had 13 points 19 rebounds and 3 blocks, Paul Hippolyte put up 20 points, 11 rebounds, 3 steals and Arthur Lisson 20 points and 8 rebounds.