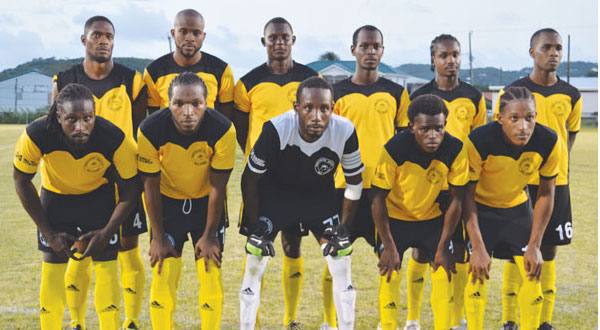 LA All Stars Take on Northern U Tomorrow

THE battle lines have been drawn for the final of the inaugural Northern Zone Club Championships sponsored by Digicel. The final will take place tomorrow at the Gros Islet playing field.

The action is scheduled to kick off from 4:00 p.m. with the third place playoff between Big Players and VSADC, while the much-anticipated final will see LA All Stars take on home team Massy Stores Northern United at 6:00 p.m.

Meanwhile in semifinal, action, on Wednesday evening, LA All Stars and Massy Northern United had contrasting victories over their opponents. In game one, LA All Stars of La Clery got past Big Players from Marchand in a hard-fought game that ended in a penalty shootout, with LA All Stars winning 4 – 2 after the score line remained nil all after regulation and 30 minutes of extra time.

Following the encounter, The VOICE spoke to the head coach for LA All Stars Leslie Nelson. He said: “I feel really proud about the players. Making it to the final is a really good feeling. We played Big Players according to our ability. LA All Stars were good enough through the 90 minutes of regulation and 30 minutes of extra time and to go on to win 4 -2 in a penalty shoot-out says a lot.”

Nelson also spoke highly of his young goalkeeper Devon St.Prix. During the 120 minutes of play, Devon came up with two big saves to deny Big Players the advantage went full body length to his left to deny Big Players’ Dwight Polius a scoring opportunity in the penalty shoot-out with the score 2 – 1 in favour of LA All Stars.

The rivalry between the Gros Islet players and LA All Stars goes even further. During this year’s Super League tournament, LA All Stars defeated Gros Islet 1 – 0 in Gros Islet, so this encounter is a must-see to determine which team will earn bragging rights for the north of the island.

In the other semifinal encounter played at the same venue on Wednesday, Massy Stores Northern United continued their winning ways on home turf with a 1 – 0 over VSADC, a goal scored by prolific striker Troy Greenidge in the 89th minute.