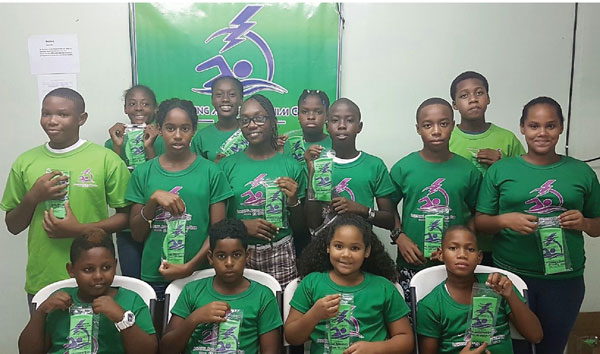 With the start of a new swim term on September 5, swimmers, coaches and parents of the Lightning Aquatics (LA) Swim Club gathered for a Goal Setting exercise on Friday, September 2, 2016.
The objective of this important session was to help prepare swimmers mentally for the upcoming local and regional competitions and to commend them. for their performance at recent swim meets.
During the session led by Coaches Peter and Marlon James and trainee Coach Shernice Popo, the swimmers were reminded of the importance of setting realistic goals, mental preparation ahead of a race, the need to eat healthy, keep hydrated, exercise frequently and get a proper night’s rest. They also emphasized the need for swimmers to remain focused on their academics whilst pursuing their athletic goals.

In her address to the gathering, President Tessa Charles-Louis said: “Lightning Aquatics Swim Club believes in preparation and we wanted to ensure that our swimmers were ready for the swim year ahead. Our swimmers worked very hard and achieved some great results last year and so we look forward to an even greater swim year 2016-2017.”

In the usual LA style, swimmers were presented with their awards from the recently-held Karen Beaubrun Swim Meet as well as with the club’s new flashy neon green swim caps to complement the new neon green club shirts that were presented earlier this year as part of continued efforts to rebrand the club.

Another highlight of the session was acknowledging the club’s swimmers who all recorded personal best times during the recent Goodwill competition. They are Annaliese Gaillard, Ethan Hazell, Karic Charles, Naima Hazell and Naekeisha Louis as well as Akim Ernest, who has officially joined the club.

Meanwhile Yannick Layne, LA’s oldest swimmer was applauded for his diligent role as a reserve on the Goodwill team. Additionally, it was noted that Karic Charles copped 1st place in the 50m breaststroke and along with LA’s Ethan Hazell formed part of the boys 8 and under relay team which snatched 2 gold medals.

Swimmers, parents and coaches gave a resounding applause to celebrate the record-breaking performance of Naima Hazell at the Goodwill Competition. Naima, who came 3rd overall in the girls 9 -10 age group, broke the record for the 50m and 100m breaststroke and is the record holder of the girls 8 and under 50m breaststroke that she set in Suriname in 2014.
This lightning bolt swimmer also won the gold in the 50m freestyle and along with Naekeisha Louis formed part of the girls 9-10 relay team which earned 2 bronze medals and one silver medal. Naima is the only Saint Lucian swimmer to have broken records at the recent Goodwill Competition.
The result of the XXII Goodwill Competition is as follows: 1st place – Trinidad & Tobago, followed by Suriname and Barbados, while Saint Lucia came 4th followed by the Bahamas and Guyana. The Goodwill Competition was held in Saint Lucia from August 19-21, 2016 at the Rodney Heights Aquatic Centre.
For more information on how to become a part of this progressive and family-oriented swim club please email lightningaquaticslu@gmail.com.