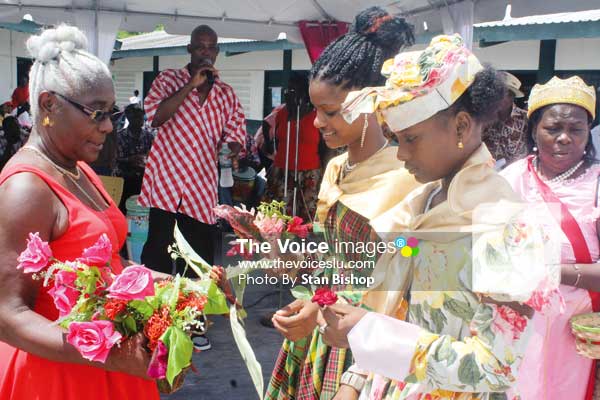 ANOTHER appeal has been issued to keep Saint Lucia’s cultural traditions vibrant and sustainable by ensuring that more dynamic involvement at the community level becomes the norm.

Father Cetoute lamented the waning interest in the festival, evidenced by both the declining number of communities having active La Rose groups and actual members participating in the annual event.

“I’m very disappointed that some of the groups are missing this year,” Father Cetoute said just before the service ended. “I need to find out why that is so. But I really encourage you to ensure that you organize yourselves long before August 30. You need to operate on an execute level so as to encourage each other, especially the young people, to keep the culture alive.”

Nevertheless, the priest said he was delighted at the high level of participation among the demographic on whose shoulders the responsibility now rests to preserve one of the island’s cultural pastimes: the youth.

“I’m happy to so see that we have some young kings, queens, nurses, and so on. I’m very pleased to see that the young people are involved. So let us do what we must to ensure that our culture does not fall by the wayside,” Father Cetoute urged the hundreds of La Rose followers.

Prayers were made on behalf of the church, youth, nation, culture, sick and elderly. Many songs of praise were also offered up to invoke the spirit of the feast.

Following the church service, the groups broke for lunch before performing their group presentations on the tarmac of the nearby Belle Vue Combined School. Presentations were laced with singing, dancing, soul and serious messages, including the need to live healthy lifestyles.