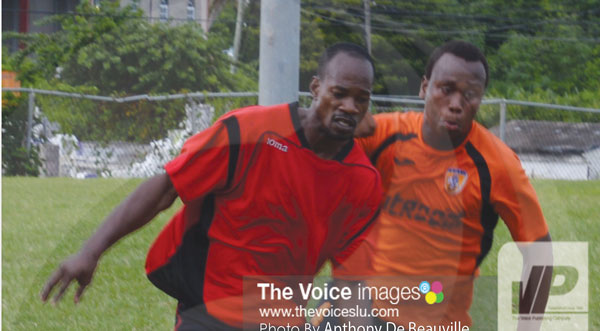 THE stage is set for semi-finals of the Digicel Northern Zone Club Championship scheduled for tomorrow.

Last Saturday, despite heavy rain before the encounter at the Marchand Grounds, NYAH FC got past LA All Stars of La Clery in a hard fought 2-1 victory in extra time.

LA All Stars opened the scoring through Junior St. Rose in the 46th minute of play. Travis equalized for NYAH FC, in the 72nd minute ending the game 1-1 in normal time. Christopher St. Catherine scored the winner in the 118th minute.

In the other quarterfinal played at the same venue, Big Players continued their goal fest with an eight-nil drubbing of Flames FC. Lincoln Phillip scored a hat-trick with goals in the 17th, 45th and 56th minutes. Other goals came from Linus Augustin in the 8th minute, Richard Smith in the 66th and 86th, Valdel Maximin in the 71st and an own goal from Bertrand Alexander in the 58th minute.

The action continued on Sunday at the Gros Islet playing field with GMC United FC playing VSADC in the first encounter. VSADC won 2-1 with goals from Shaquille Joseph in the 41st minute and Decorsey Simon in the 82nd minute. GMC’s goal came from Tev Lawrence in the 60th minute from a well-struck free kick just outside the box.

Meanwhile, the final is set for this Sunday at the Gros Islet playing field with the third place play-off scheduled from 4:00 p.m. and the final at 6:00 p.m.