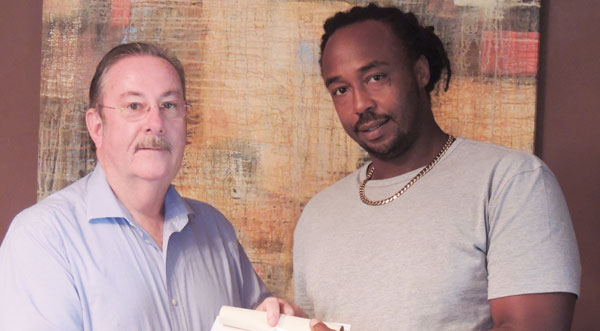 IN the hotel industry, it’s usually the front-line employees who get the spotlight, attention or recognition. Most times it’s employees from font office, bars or water sports who win the top prize.

Not so at a recent Employee of the Month award presentation at The Royal by Rex Resorts. The top winners were from the kitchen and housekeeping.

Oswald Clarke is just about six feet tall and weighs close to 200 pounds. Never mind his imposing figure, he’s a gentle giant. Oswald, who works as a steward, does all the heavy lifting of frozen foods and fresh local produce for Chef Eike and his team in the kitchen. He has been at The Royal close to three years now. Prior to joining The Royal, he worked in construction.

Asked what earned him the Employee of the Month title Oswald replied: “I work really hard, I respect my managers and supervisors and I get along well with my co-workers. I am very happy to have been nominated and won, and my mother is also very proud of my achievement.”

Oswald is the father of a six-year-old son, Chezidek. He was excited to share the good news with his son in the hope that it would inspire him to do better in his schoolwork as well as his extracurricular activities.

Oswald, who believes his recognition is well deserved, says he is motivated to work even harder and give even more to The Royal.

The second awardee is 20-year-old Francois Leriche of Housekeeping. Francois copped the Employee of the Month award after just eight months at The Royal. He is the youngest of just five males in the Housekeeping Department. It’s also his first serious job. He does some part time farming with his brother.

Francois, who likes to “meet new people and learn new things,” says it was always his desire to work in the hotel industry. About his award, he said: “I feel very happy, very proud. I’m glad my efforts are being recognized.”

Francois attributes his award to hard work, commitment, punctuality, and respect for his superiors. He also plays as a midfielder on The Royal’s Football Team in the SLHTA Competition.

In his brief remarks, General Manager, Richard Michelin congratulated the nominees and overall winners and encouraged them to continue to give of their best. He told them: “You have demonstrated commitment to your jobs in your respective departments. You have gone above and beyond the call of duty, you’ve carried out your instructions diligently, you’ve used your initiative, and we are happy to recognize and reward your efforts.

Close to 20 employees from various departments of the hotel including front office, bars, restaurant, kitchen, maintenance, housekeeping, the laundry, and the spa, were nominated and attended the luncheon and awards presentation.