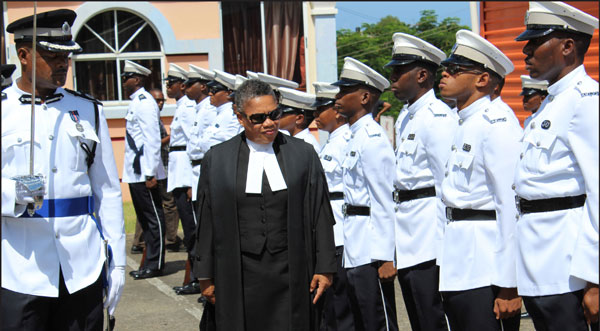 ATTORNEY General Kim St. Rose has vowed to jealously guard the independence of the court in the face of what she saw as growing attempts to influence the course of justice.

St. Rose, who spoke at the opening ceremony marking the 2016/2017 new law year, said that she was speaking for the Bar Association of St. Lucia as well.

“We commit to guard our court’s independence jealously and to encourage all ancillary courtesies which will continue to uplift our judiciary,” she said.

The Attorney General, with whom Prime Minister Allen Chastanet, at a press conference, Monday said he has a difficult working relationship with, expressed her concerns on hearing of attempts to influence the court.

“I was concerned to hear that attempts to influence the court are growing,” St. Rose said.

Her working relationship with the government seems to be causing problems for Prime Minister Chastanet who admitted that while he would have liked to have her removed from the position of Attorney General, he cannot do so on his own.

“It’s a difficult situation,” he said in reference to working with St. Rose who sits in his Cabinet. “The Prime Minister does not have the ability to fire the Attorney General or move her in anyway.”

The case surrounds the alleged use of public monies for Chastanet’s launch as a candidate of the United Workers Party for Soufriere in 2011.

The UWP lost the general elections that year, however, prior to that, the SLP, which was in opposition at the time had raised the argument that the funds used to finance certain aspects of Chastanet’s launch were improperly spent, meaning that those funds were publicly owned and, therefore, should not have been used for such an activity or part thereof.

The SLP, upon getting into office, brought their complaints to the High Court in a case of the Attorney General, Kim St. Rose, versus Allen Chastanet and the Soufriere Town Clerk at the time, Kenneth Cazaubon.

St. Rose became the Attorney General in 2012, hired by the Public Service Commission on recommendation by the former administration.

The case was dismissed by Justice Francis Belle. However, St. Rose appealed Belle’s decision and was successful in that the Appeals Court reversed his decision and forwarded the case back to the High Court to be heard by another judge.

The charge against Chastanet is misfeasance in public office.

The Prime Minister acknowledged that St. Rose, who sits in his Cabinet, had been unable to give the government advice on moving forward with that case.

“She finds it difficult to give any advice and hasn’t offered any advice,” he said.

According to Chastanet he would have liked to solve the problem with the Attorney General through arbitration however if this is not possible then he would have no choice but to ask the Governor General to look at appointing an attorney general from a political position.

“I’ve tried not to do that,” Chastanet said referring to replacing St. Rose as Attorney General.

“I’ve asked the Attorney General if she would consider becoming my legal advisor. I would have her work exclusively on the constitutional review of St. Lucia,” Chastanet added.

He said that paying St. Rose off so as to get rid of her in that position would be too costly for the country.

“Given the financial state of the country I would find it difficult to fire her just on the basis of politics,” he said.

DAME Janice Pereira, Chief Justice of the Eastern Caribbean Supreme Court, inspecting a Guard of Honour at the opening of the of the 2016/2017 law year on the grounds of the National Cultural Centre, Tuesday.

This law year will also mark the 50th anniversary of the court, the actual celebratory date being February 27, 2017, a time of celebration for the legal fraternity of the jurisdictions the court serves.

Since that time the court has grown from strength to strength, remaining steadfast in its mandate to provide the people it serves access to a system of justice that is fair, efficient, accountable and independent.

“This is the yardstick by which we must be held accountable by the citizens of the region whom we serve,” Pereira said in an address at the special sitting of the court to mark the new law year.

He message was streamed live to the other jurisdictions of the court.