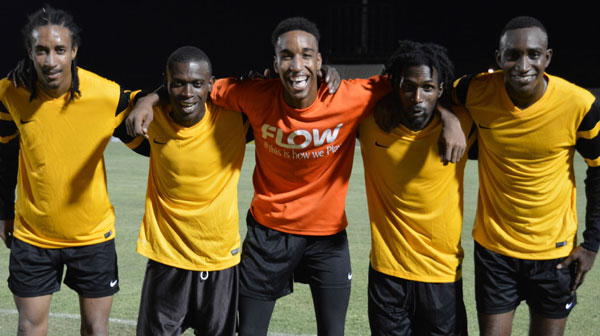 Central Castries was the first team to do so when they defeated Roseau Valley 2 – 0 with goals from Shaquille Joseph in the 41st minute and Zachery Lerich in the 83rd minute. Roseau Valley team have themselves to blame for not converting their scoring opportunities. Despite that Central Castries team showed composure in both their attacking and defensive abilities.

In game two, dubbed a “West Coast Derby” played between two former champions, Anse la Raye took on their neighbours Canaries. The score remained goalless at the end of the first half as the two teams found it difficult due to the heavy dew on the surface.

On the resumption both teams upped the tempo, but it would be Canaries despite being one man down, winning by 1 – 0, a goal scored by Stephon Longville in the 78th minute.

On day two La Clery for the first time in seven years jumped a major hurdle by going through the second round, in the process booting out three time champions, Dennery.

Already being described as the goal of the tournament, La Clery’s Travis St. Pierre’s scissors like volley from 25 yards out eluded the Dennery goalkeeper in the 35th minute, sending the crowd wild.

In the final encounter on the evening, playing with 10 men after Wayne Theodule received a red card, Mabouya Valley were still able to defeat Babonneau 2 – 0 with goals from Julius Louisy in the 31st minute and Vernon Abbott in the 36th minute.

The tournament continues tomorrow at Phillip Marcellin Grounds in Vieux Fort with a double header. From 6:00 p.m. South Castries plays Vieux Fort North and at 8:00 p.m. Marchand will come up against Vieux Fort South.