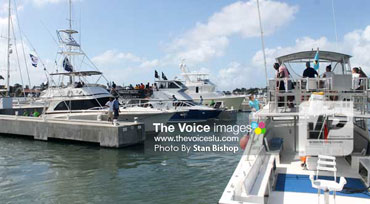 IMPROVED services at the Customs Department, Saint Lucia Air and Sea Ports Authority (SLASPA), immigration and the marinas are being credited as some of the reasons for a double-digit increase in yacht arrivals for the first half of this year.

Statistics released to The VOICE this week indicate that total yacht arrivals between January and June this year recorded a 28.8 % increase over the same period last year.

A total 29,101 yacht arrivals were recorded for the first six months of this year compared to 22,593 yacht arrivals for the same period last year. The total is based on figures collected at Rodney Bay Marina and Marigot Bay.

Rodney Bay Marina experienced a 32.4% increase during the period while Marigot Bay arrivals increased by 18.6%.

The statistics were compiled by SLASPA and published by the Saint Lucia Tourist Board (SLTB).

According to Cuthbert Didier, Maritime Consultant in the Ministry of Tourism, other factors that influenced the spike in arrivals were increased visibility for Saint Lucia at three international boat shows, an increase in charter vessels visiting Saint Lucia and easy access to clearing items for yachts in Saint Lucia.

He said the figure shows that attending those international boat shows and increasing the visibility of Saint Lucia with its several destinations along the coast – especially Rodney Bay, Marigot, Soufriere, Laborie and Vieux Fort – is working.

“The boats are coming, they’re bigger and most of them are charter operations,” Didier explained. “So this is great news for us. What’s going to be even more exciting is if we can sustain these increases going into the traditional summer period or the hurricane season.”

Didier said the Mercury Beach event held in Saint Lucia earlier this month attracted an estimated 420 yachts to the island. Those yachts, he said, emanated from various Caribbean islands, including Martinique, Guadeloupe and Grenada.

While the increases are based on figures for Rodney Bay and Marigot Bay only, Didier said measures were put in place last month to ensure that figures for Soufriere are tabulated properly. The change came following intensive discussions involving SLTB, SLASPA and the Ministry of Tourism.

“We now have a system that we’re comfortable with; it’s accurate for now,” Didier stated. “But we’re hoping that it can be computerized like the other destinations, such as IGY Rodney Bay Marina and CapellaMarigot Marina.”

With various major development projects earmarked for Vieux Fort, Didier said a marina for the south becomes even more essential. While he admitted that a healthy debate might be needed to pin down a location, he believes the Wilrock site close to the airport is most appropriate.

Didier added that his ministry has had preliminary discussions with a Russian investor for the past two years and that investor is currently finalizing certain aspects about a prospective investment before making a presentation to the government.

Didier, whose experience in maritime affairs span nearly three decades, said studies indicate that the yachting sector in every Caribbean island contributed six times more the amount of revenue for those islands when compared to the cruise industry.

Didier said that while many officials within the government service do want the yachting sector to perform better, the systems, procedures and protocols are preventing that change from taking place. He believes that while some positive strides are being made, “we’re not moving as fast as I would like us to.”

“The yachting sector is definitely being undervalued and we need correct data so that we can capture its full scope. We really need to have a very holistic approach to doing this which could probably be conducted by the Ministry of Finance. We need to be able to capture the revenue stream and the contribution to the gross domestic product (GDP) by the yachting sector,” Didier explained.

Didier said he remains “very positive and upbeat” that the double-digit increase in the yachting sector will continue. However, with many Caribbean islands competing within the same space for that niche market, a more concerted effort needs to be applied to ensure that the sector remains beneficial to Saint Lucia.

“If only we can see the potential of this industry and focus on developing it, I think the benefits will be phenomenal for us – both in yacht registration, revenue for SLASPA, and investment tied to the Citizenship by Investment Programme,” Didier said.