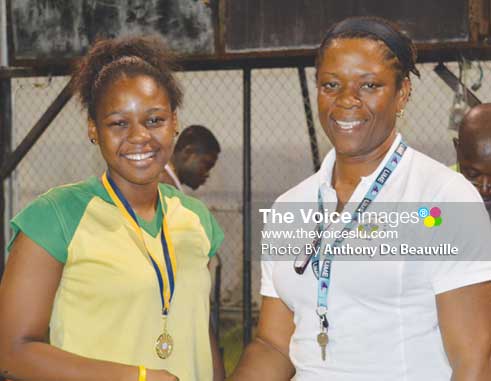 NATIONAL female volleyballer Jedda Alcee is on her way to Kansas City in the USA, Alcee has accepted a partial volleyball scholarship for the 2016 Fall Term to study Meteorology at Dodge City Community College.

She hs been playing volleyball for the past seven years. Her exploits started after playing in 2009 at St. Joseph’s Convent Secondary School. She went on to represent the school from 2011-2014 and captained the team from 2012 – 2014. The growth as a team was undoubtedly significant, achieving bronze in 2012, and Gold in 2013 and 2014.

Apart from playing, she is a trained Volleyball Scorer for both beach and hard court and volunteers her services in scoring, refereeing, line judging and ball retrieving at local, regional and international tournaments held in Saint Lucia. She is a certified FIVB Level 1 coach.

She is a member of the Executive of Le Club Volleyball, holding the position of Treasurer, and helps coach the younger female members of the club.