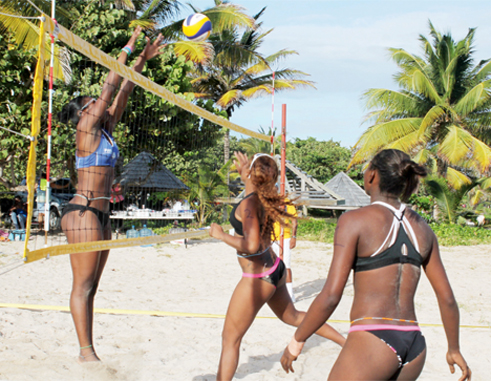 A twelve member team has been selected by the SLVA and will be captained by middle blocker-Yosherbel Emmanuel. She will have alongside her vice-captain and outside hitter Kerin Neptune; Jayda Hunte, opposite; Aryel Leonard, Fian Alexander and Kait Gaillard – middle blockers, Amika James, Lina Charlery, TessianaNorley – outside hitters; Skye FaucherMondesir, Kaitlyn Gaillard – setters and LovelleAuguste – libero.

Over the next two days of competition the St. Lucia team will be under the watchful eyes of head coach Joseph Clercent and manager ShayeFelicien. According to SLVA this is Clercent and Felicien’s first outing as national coach and manager respectively as the SLVA continues to encourage the development of new coaches and managers in its ranks.

Clercent is no stranger to ECVA as he is a current national senior player in both beach and indoor volleyball and has won many accolades playing for St.Lucia.

St. Lucia will do battle against Antigua and Barbuda, the British Virgin Islands and St. Vincent and the Grenadines.

Clercent Says the St. Lucia team has been preparing for over six months and possesses a wealth of experience, as all the players have appeared for Youth and Junior National Female Teams over the past two years. With the ECVA extending its growing categories to under -23, it is the hoped that St. Lucia adds another championship trophy in its ever-growing cabinet as ECVA Champions in both formats of the game.