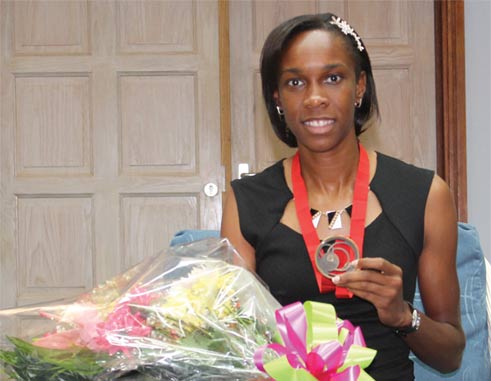 ST. LUCIA’S most decorated track and field athlete and world ranked high jumper Levern Spencer is in the final of the ladies event today, at the Rio olympics. The 32 year old qualified for the grand finale when she cleared 1.94 meters during the week.

Spencer is the only athlete from the Caribbean competing, in the high jump compatriot JeannelleScheper failed to advance, while Antigua and Barbuda’s Pricilla Frederick and Barbados Akela Jones fell short of the qualifying height.

On Thursday morning thousands of St. Lucians both here and abroad were glued to the television sets to see two of Fair Helens princesses in action on the global stage, and they were not disappointed.

Today’s final will be even more interesting as for the first time a St. Lucian has made it to the final of an Olympic Games event since St. Lucia started to compete in 1996 (Atlanta).

So the mystery question is Will she make it? Will she get a medal? The answer to this is very simple. Spencer is a winner and by just making it to the finals with 16 of the World best is already a crowning glory. But a medal today will be the icing on the cake for an athlete who has served St. Lucia with pride and distinction.

Five of the ladies in this year’s finals competed in London 2012 – Ruth Beitia (Spain) finished 4th with a clearance of 2.00 metres, Chante Lowe (USA) 6th with 1.97 metres, Svetlana Radzivil (Uzbekistan) 7th, with 1.97 metres and AirinePalsyte (Lithuania) 11th with 1.89 metres; while in the qualifying round Spencer finished 19th with a height of 1.90 metres.