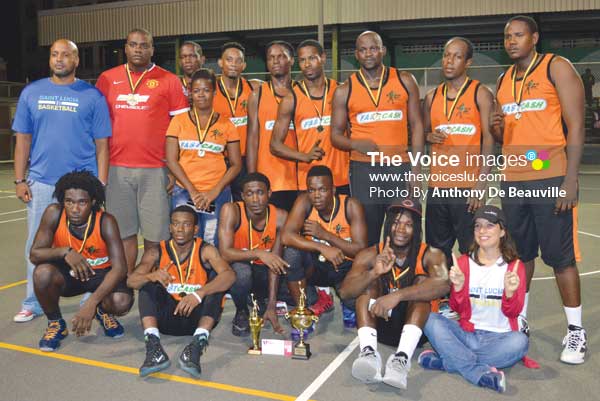 RUN N GUN All Stars is the new St. Lucia Basketball Division 1 champions. The boys from the south of the island defeated Basketball For The Future 87 – 64 on Saturday evening at the Vigie Multi-Purpose Sports complex in the Finals.

From the opening tip, Run N’ Gun dominated the BFTF with an aggressive up-tempo style, which enabled them to jump to 22 -10 lead at the end of the first quarter.

The dynamic trio Rahim Auguste, Zephtan Fontelio and Tim Auguste, was just too potent a combination for BFTF as they cruised to a comfortable win 87 – 64 at the final whistle.

With the three-match series tied at 1 – 1 and playing at home, BFTF never looked like the same team that defeated Run N Gun at the Beausejour Indoor Facility to square the series exactly three weeks ago. With a handful of supporters cheering them on in the stand, one would have thought that would have inspired them to make a match out of it. But that was not to be as Run N Gun continued their dominance both offensively and defensively at to lead 46 – 27 at the end of the second quarter.

Up by 21 points going into the third quarter, Run N Gun continued to press on their advantage to end with 64 – 44. The BFTF faithful’s in the stand still had what it takes to keep on cheering despite being shocked by what was actually happening on centre court.

Run N Gun’s furious onslaught was led by Zephtan Fontelio who finished with 23 points, 8 rebounds and 3 steals and was named the KFC Player of the final.

However, like any good team in basketball BFTF showed maturity and good sportsmanship at the end.

Run N Gun’s Rahim Auguste was adjudged the MVP of the tournament. Run N Gun received the championship trophy, a monetary prize and gold medal. Seven-time champions (five consecutive) Courts Jets were on hand to receive the KFC League title, a monetary prize and gold medals; they defeated rivals VBCC Warlords in their best of three series. Troy Louison was named the Finals MVP in the Premier League.