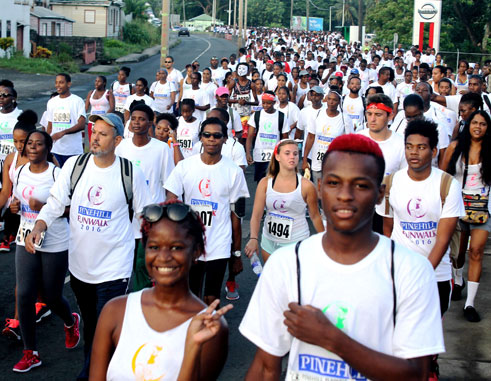 Share this post
ANGER and disappointment of dedicated participants in the 17th annual PinehillFunwalk was the talk of the day on Sunday after an implemented change with good intent left oblivious walkers feeling incensed and duped.

Thousands of participants arrived at the starting line along the John Compton Highway before the starting time of 6:00 a.m. and were greeted with news that did not sit well for walkers hoping to earn a medal at the finish line.

Upon arrival, announcements were made regarding a change involving participants’ numbers where persons bearing numbers with a “P” (P meaning power walkers) were entitled to win medals. But only 300 of these numbers were available.

To add fuel to the already heated atmosphere, participants with plain numbers were informed that they would have to wait to allow walkers with the “P” numbers to go at the first signal, whilst other participants were allowed to go only after a second signal.

Irate participants complained that this was not what they paid the $25 fee and signed up for as they too were hoping to attain a medal for their efforts.

The VOICE spoke to a number of individuals who felt that the idea and the manner in which it was implemented was poorly planned and disorganised:

Brian Moncherie: “That move didn’t make any sense and a lot of people got cheated because of it, because if it was explained to us in the first place, then we would have taken it accordingly. A lot of people arrived early and had to stand there watching people coming in and because we didn’t have a P, we didn’t get any prize…that’s not fair. I’ve been competing in this walk for a number of years and to me, this was the first time that it was disorganised.”

Wayne Gaston: “I don’t know if I came in time for a medal but I was still aiming for one. I saw a lot of frustrated people and I mean, this is not right at all. At least, people should have been notified when they were registering. I’ve been taking part in this for years and I’ve won lots of medals but when I came, they were not giving medals again.”

Rufus Darcie was perhaps one of the most irate participants after arriving in the top ten and was denied a medal for his achievement.

Darcie, who has been a long distance walker for many years, said this was his first time participating in the PineHillFunwalk, but after the treatment he received, this will most certainly be his last time taking part: “In registering, they didn’t mention anything about having the P, so I registered thinking that all I would need was the sign with my number. But when I arrived in the morning to do the walk, the people are saying that you must have a P. So I went to the officials, they told me that I should have signed up for a P number during the registration. But anyhow, they told me that they will remember my face so I should just go ahead and participate and if I’m one of the first few to arrive then I would get a prize. I went ahead and I was even competing with those that were in the first set to go. When I arrived, I was the seventh person there and I got nothing. I saw so many people who came after me getting medals and I’m there expecting to get one but…Nothing! I mean, even though I didn’t have a P, I did well…I competed and I reached seventh, I should have gotten something to show that I did well in the walk! I was so angry that I just threw their bottle of water back at them because that was the only thing they gave me…a bottle of water!”

Third place contestant Julian Toussaint said luckily for him and second place second place contestant NevilDupre, judges used their discretion thanks to their past performances in the event: “It was a good strategy but it wasn’t all that organised because as a power walker, when I registered, I wasn’t told anything about Ps and it was whilst we were on the road, we found out that we were supposed to have a P. We kept walking with the Power Walkers until they finished and they considered us second and third place winners.”

Krystal Francois who is the Brand Manager for Pinehill, acknowledged the mishap and vowed to have the initiative reassessed and corrected in time for next year’s event.

Francois said however, that the new aspect of the walk was put in place for the sake of serious and honest participants who walk the whole route with hopes of winning a medal:

“Throughout the entire year, we’ve been hearing complaints about people cheating, because we understand that some people walk for various reasons…some people walk for fun, others walk for fitness, some for health and some people want to compete…every year, there are people who religiously want to compete. So what we did, we allowed for 300 competitive walkers…those persons who are serious about walking and they want to be able to walk competitively. We catered for 300 because realistically, that is the number we could have managed, so those persons were checked along the route so we were sure that they actually completed and those persons were rewarded with medals.”

She added;:“In going forward, we just need to communicate it to persons early enough. However, it was on our instagram and Facebook page, also, I spoke about it on RCI and we did communicate it at the beginning of the walk and at every registration point. With that said, we will start earlier with the communications so persons know exactly what segment they fit into and for us, we’ll just try to strive to be better every year.”