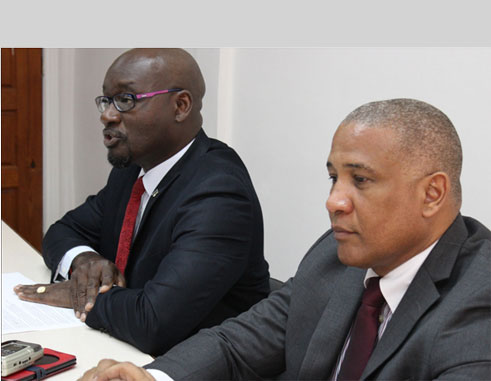 POLITICAL and environmental issues are being raised over the US$2.6 billion project that was signed last week by Prime Minister Allen Chastanet and developers, Desert Star Holdings Ltd.

An SLNT spokesperson told The VOICE yesterday that “at this point, the Trust will not comment until it meets with its Council and members.”

It is unclear when the Trust would be able to make a statement on the project since its director, BishnuTulsie is said to be out of the island.

Meanwhile Moses Jn Baptiste, the former Agriculture Minister said the project could have a lasting impact on the agriculture, fisheries and livelihood of coastal communities.

JnBaptiste,at a press conference yesterday, recalled that he was part of discussions concerning the project when his government was negotiating with developers back in 2014.

“In addition to my direct participation in the discussions, one officer from the then ministry of Agriculture, Fisheries, Food Production, Cooperatives and Rural Development attended at least one of the discussions and made oral submissions. The Permanent Secretary of the then ministry which I was responsible for was also briefed on the possible impacts of the proposed project on our sector, Agriculture, Fisheries and the livelihoods in coastal communities.

“During the discussions at my first briefing, it was very clear that the investors wanted the newly constructed Meat Processing Facility to be removed or not commissioned, as according to them the slaughtering of animals especially swine was incompatible with the development. In addition the entire Beausejour Farm Station buildings needed to be demolished to accommodate the new development.

“It was my view then and I impressed on the developers that the Meat Processing Facility could not be moved or demolished as government had expended a large sum in addition to that donated by the government of Taiwan. Subsequent to my submissions another meeting was held and at that meeting new plans were presented which kept the meat processing facility. Pork and pork preparations however would have to be disallowed,” Jn Baptiste said.

He said that during the discussions there were extensive environmental issues associated with the project, especially with the use of the Mankote′ Swamp.

Dr. Ernest Hilaire, the Labour Party’s shadow Minister on Commerce and Investment, also present at the press conference, noted that the Labour Party had involved the National Trust in the preliminary discussions but wished to enquire whether they were consulted before the final agreement was signed.

Both Jn. Baptiste and Hilaire believe that the project, if it materialises, has the potential to contribute significantly to the development of the southern part of the island, diversify the island’s investment portfolio and in particular, help to reduce unemployment in the island. However, they shared the view that for the promised benefits to materialise, the project will have to be designed and implemented with considerable sensitivity as it could cause major disruption and dislocation in the lives of citizens in the south of the island.

Said Hilaire: “ It is interesting that the former SLP Government was in negotiations with the developer over a period of at least eighteen months and within less than two months of being elected to office, the Allen Chastanet led government has signed on the dotted line and agreed to proceed with the project. We note that the project has been signed with absolutely no dialogue by the current Government with the community of Vieux Fort.”

He added that while the former government had agreed on most of the fundamental points of the agreement with the developer, DSH, there were some critical elements which required national consultation and even parliamentary debate and approval.

Hilaire, however, had some questions for the government. According to him the government press release speaks to the Desert Star project being the first and only integrated resort development project in Saint Lucia.

“Does that mean that the Allen Chastanet Government agreed that there cannot be any approval given to a local or foreign investor for another integrated resort development? If so, can the Prime Minister clarify what was agreed upon as an integrated resort development? Were any exclusive rights given to DSH for the operation of a casino, horse racing facility, betting facilities or citizenship by investments? If so, how would these concessions, if granted, impact other investors who may wish to invest in Saint Lucia presently and in the future?” Hilaire asked.

Said Hilaire: “The Prime Minister announced that horse racing aspect will become a qualifying investment. The Saint Lucia Labour Party must ask why this is necessary if the horse racing facility and casino are parts of a hotel development project which currently qualifies as an investment under the CIP. Further does that mean that any investor interested in horse racing can apply under the CIP or is this exclusive for DSH? “

Hilairesaid the SLP also noted the procedures for CIP-approval status to be given and wished to know whether the CIP Unit received an application from the developers or CIP approval in accordance with the Act and its Regulations?

“More specifically, the Saint Lucia Labour Party wishes to know whether the CIP Unit approved and made a recommendation for the project to be approved”, he asked.

“The Saint Lucia Labour Party also notes that for a project to receive CIP-approved status it must be granted DCA ‘approval in principle’. Did the DCA provide such approval? This is critical because once a project is CIP-approved, the developer can commence selling investments which is a right to citizenship but if there is no DCA approval the project cannot commence. Further, if it is never approved what happens to the investments which applicants would have made? Therefore, has the DSH been given approval to commence marketing and selling citizenship through investment before it has DCA and CIP approval?