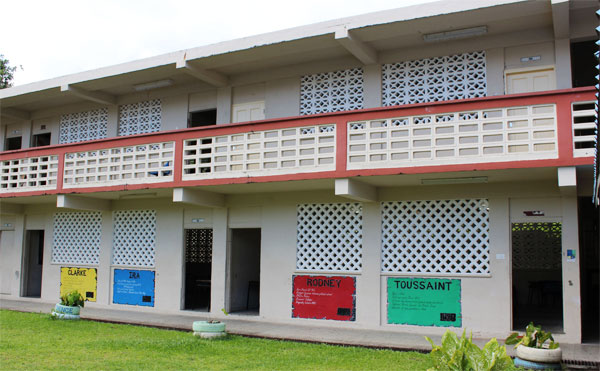 RECENTLY, the new Principal of Sir Arthur Lewis Community College spoke on the poor condition of the buildings and the fact that it was now at the point where classes had to be relocated.

The Weekend Editorial of The VOICE expressed concerns on the neglect in the education sector and referenced a previous publication of the condition of the Soufriere Comprehensive School. The Editorial continued by asking a series of questions;’’ What went wrong with our education system?” Was anyone monitoring conditions that were clearly deteriorating before their eyes? Was the Ministry of Education aware? Was the Minister? Was the Ministry of Infrastructure which we are told had responsibility for schools? Was that Minister? Or is this the case where everyone with oversight of the school plant slept on the job?”

All the questions are valid and should be answered. Just next to that editorial was a view expressed by the present Minister of Education – Hon Dr. Gale Rigobert in which she stated: “I understand that at the last fiscal cycle, when the audit of schools infrastructure was done, the total estimated cost of rehabilitation hovered around $ 13.0 Million while the amount allocated in the 2016/17 budget was $ 1.0 Million.”

In a casual recent conversation I had with Mr.BishnuTulsie, he advised that the problems at the Castries Comprehensive School existed during the time he was a teacher there. He left over 20 years ago.

For the last 40 years, school buildings have been seen as a political accomplishment. A Member of Parliament believed that the establishment of a school in his constituency was a sign to his constituents of an expression of care. The same holds for Police Stations, Fire Stations and Health Centres. The government is thus now the owner of the largest stock of buildings in Saint Lucia. Let us extract the schools to observe what went wrong. Saint Lucia’s Education system functions with 90 Primary schools and 23 Secondary schools. Of the 90 primary schools, there are three private schools which are all in the North of the island, one Methodist, six Roman Catholic, two Anglican and three Adventists. I know that there is some arrangement with the churches to assist in maintenance of schools, so we can conservatively say that maintenance of over 80 primary schools, 23 secondary schools and one tertiary school will be the responsibility of the government.

Undoubtedly, we have to take a bold and decisive position on the amalgamation of schools and to create an efficient school transportation system that supports these new clusters. We had 2419 students sitting the Common Entrance exam from 90 schools and thus we have an average enrolment of 27 students per school. Another way of expressing this statistic is to say that we have an average of ‘one classroom’ schools in Saint Lucia. There is thus no mystery in the problems we face in maintenance of this stock of buildings.

The fact remains that amalgamation of school has to be considered as a policy going forward and some primary schools should be closed down and converted to adult learning centres managed by the private sector. The stark reality is that Saint Lucia cannot afford to maintain its present stock of over 100 public schools, and we have to be decisive in taking proactive decisions to reduce that number.