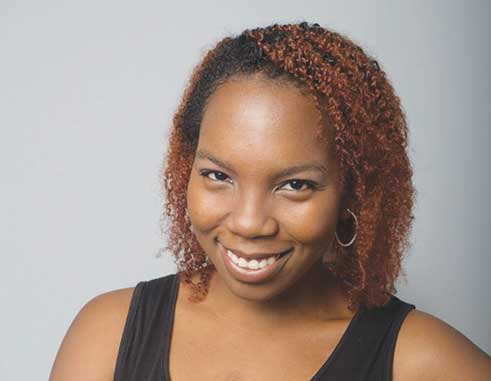 TODAY’S FITC is a special one for me because this lady has made me laugh, yell, shake my head and break out into applause…and that’s just after reading one of her many posts on social media.

Janeka Simon is a 34 year old Freelance Communications Professional who, with the partnership of three peers, runs a Communications Consulting Agency which is an apt career considering her clear enthusiasm for the English language.

Simon has a reputation among those who know her, for being a stickler for the way in which the language is spoken or written and on many occasions, is well known to, almost on a daily basis, point out and or correct errors in the posts of friends, whether they are grammatical, wrong information or even misguided opinion.

Whilst to some, this may appear to be irritating, arrogant or even unwarranted, to others, it comes across as bold, unwavering and even refreshing to see someone willing to be a pain for the sake of speaking properly, factually or even logically.

There are times when the “Word Junkie”…well, that’s what I call her in my head anyway, can send the minds of the average English speaker into a spin with her vast and rich vocabulary. However, there is no need to worry because fortunately, this modern gal knows just how to get her message across and to whom.

For today’s interview, it is advisable to have a dictionary in hand.

The VOICE: You have a clear and unapologetic passion for the English language and you make no bones about it. Tell me about that passion and where it came from.

Janeka: It’s strange to think of it as having a “passion” for the language. I grew up in a reading/literary household because my mother and grandmother are both life-long educators. My parents used to read me stories every night and when we ran out of books, my dad would be forced to make them up on the spot. I always loved to read and was left to run riot in the library as soon as I could read on my own. It was a pleasure getting lost in the stories, and I consumed them like junk food. Soon, Enid Blyton’s stuff was too tame, so I went after the Nancy Drews. After I realised the formula, I started reading “grown up” books, like Tess of the D’Urbervilles and Wuthering Heights… I never looked back. I actually studied Math and Computer Science at school, so I do think of myself as having a dual-brained approach. In my stint as a remedial math teacher, my students enjoyed the parallels I drew between language expression and math expression. To me it is one and the same, just a way to exchange ideas and communicate as humans.

The VOICE: You are somewhat like a walking dictionary. Have you ever tried to measure your depth of knowledge of the English language?

Janeka: My SAT verbal score was pretty close to perfect, but I have no knowledge of “vocab-aptitude” tests that are comprehensive and accurate. I do take the ones that pop up on Facebook. It’s good to know that I’m still pretty knowledgeable in that regard.

Some people actually did call me “walking dictionary” at secondary school and A-level, but with the advent of technology most people prefer to call me Google.

The VOICE: You are very active on Social Media and on there, you are known for “correcting” people or as they call it, being the “Grammar Police”. Why do you feel the need to do that and have you ever been called out for it?

Janeka: I am always called out on it but I don’t care. Having a shared lexicon is very important to human communication. I know that language changes over time, but we still must be careful to be correct, so that we can impart precise meaning to our words. In the age of the internet when we don’t have non-verbal cues to go by, the accuracy of our language is even more important.

The VOICE: What irks you the most about the way people misuse the language in both spoken and written form?

Janeka: I think the carelessness of people is most irritating to me, as well as the inability to self-edit. Common words should be recognisable on sight so that if you spell them wrong, you can immediately see that. I will forever struggle with the word bureau but I will always know when I’ve messed it up, because I know how it’s supposed to “look”.

The VOICE: What is the furthest you have gone to correct someone?

Janeka: I can’t think of a specific example, but my friends and acquaintances know that I will bust out as much research as I have the time for, to prove a point.

The VOICE: On a lighter side, how badly do you want to point out any errors I’ve made with my questions?

Janeka: I am not sure if you’re aware that you used Question 6 twice, but it is hilarious irony that you made the error in a question about me pointing out errors. So far though, you’ve been doing well. I haven’t seen anything egregious to make my eye twitch. My own answers are probably riddled with grammatical errors as well. I’m very laid back when it comes to instant messaging, once people are typing in actual complete words and sentences.

The VOICE: Have you ever considered writing a book? If so, what would it be about?

Janeka: I often have whole story-lines for books floating through my head, but I think I am probably not disciplined enough to sit still long enough to write them down. But if one day I did, it would be a work of fiction! A silly little story, probably for children.

The VOICE: Many times, the average person would have difficulty in understanding what you are saying whether in spoken or written word. Is it difficult for you to “dumb down” to speak at a lower level or are you more understanding of the time and place for your eloquence?

Janeka: I think I am pretty relatable in casual conversation. I am very aware of the concept of “language registers” in which you adjust your language to suit your context. I don’t see it as “dumbing down”. It’s just about using the most appropriate words for the situation in which you find yourself. Unlike some well known national figures, I do not deliberately attempt to obfuscate my message in florid vocabulary.

The VOICE: Are you ever worried that people might get the wrong impression of you and think of you as a snob?

The VOICE: We are now in the days where it is the norm to use abbreviations and acronyms when talking like “LOL” and “OMG” as well as cutting regular words short altogether like “yh” for yes as well as “ur” for you’re. Also, new and ridiculous words are also being inducted into the dictionary at an alarming rate like “Selfie”. What say you on this blatant butchery of the language?

Janeka: Well, as I mentioned, language is a fluid thing. With new technology comes the necessity to express new ideas. I have no problem with LOL and OMG, as acronyms have been rampant across the language for a very long time. I’m less happy with the “shortening” craze, as I think it hinders legibility for not very much pay-off….so LOL for “laughing out loud” is fine, but “yh” for yeah is just really stupid. What are you really saving? The new words are necessary because again, we have new ideas and new concepts that we need to communicate. Sure, a “selfie” is a photo that I took of myself using my phone’s front-facing camera, but see how I can get that whole idea across with just one word? “Selfie!” it’s cute.

The VOICE: There is no question surrounding the importance of a good command of the English language. If you could, how would you go around delivering that message of importance to St. Lucians?

Janeka: Wow, that’s a great question. I think I would emphasise the constant judgment surrounding our interpersonal relationships. People draw conclusions about your intelligence and competence based on a number of factors, your command of the lingua franca being one of them. You’ll never imagine how many resumes, proposals and other professional documents I have come across that are written in terrible English. No matter how impressive everything else looks, I can’t take someone seriously if they don’t make the effort with the language. If you’re not very good at writing, let someone else edit the work. No shame in that. The goal is to get your message across. Do what you need to do to make that happen.