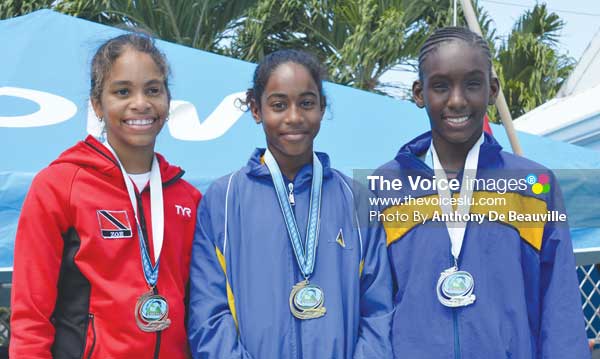 IT was certainly a splash at the 22nd edition of the Goodwill Swim Meet, among Suriname, Trinidad and Tobago, Barbados and Guyana, special invitees the Bahamas and host nation St. Lucia at the Rodney Height Aquatic Centre in Gros Islet this past weekend.

The Goodwill Swim Meet is a developmental meet for swimmers from the participating countries who have not yet competed at higher levels of regional competition such as the annual Carifta Championships.

Swimmers use the Goodwill Swim Meet as a launching pad towards higher levels of competition. Despite the myriad problems that often handicap the development of their swimming programmes, the participating countries use the meet to provide their swimmers with a taste of regional rivalry and this year in St. Lucia was no exception.

While promoting the sport of swimming in these developing countries remained the goal, the competition in the pool is especially fierce, but on the outside, the intensity continued with a carnival-type atmosphere, flag waving and friendly rivalry amongst the many supporters who included parents.

At the closing ceremony held at Cap Estate Golf Club on Sunday evening following three days of intense action, Trinidad and Tobago emerged victorious as they captured the championship for the third consecutive year running.

Trinidad and Tobago ended with 1465 points, a mammoth 339 points ahead of second place Suriname on 1126 points, Barbados on 741 points for third, St. Lucia on 681 for fourth, the Bahamas on 586 points in fifth place and Guyana with 373 points in the cellar position.

Based on the final results Trinidad and Tobago were able to maintain a stranglehold on the championship trophy although they did not dominate the 8- and under boys age groups like previous years. St. Lucia gave them a run for their money this time around tied for first place with 104 points, while Barbados took the girls title with 109 points, Trinidad and Tobago 2nd with 74 points and St. Lucia on 36 points for 5th place; but the Trinidadians remained competitive in the other age groups. Trinidad and Tobago’s depth was also reflected in their winning 5 out of 12 relays, placing second in four and third in another.