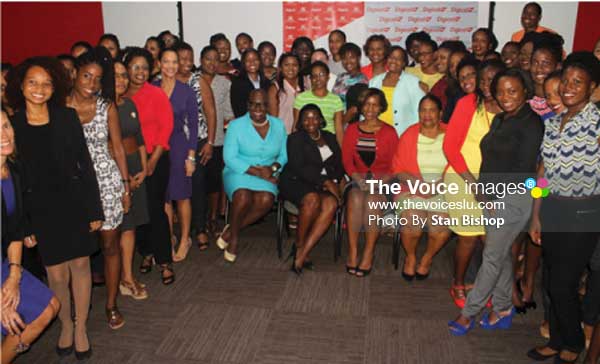 TELECOMS provider, Digicel, believes it has found a perfect way to ensure that no aspiring professional woman is left behind on the corporate ladder due to a lack of confidence and motivation.

The company is now touting its Women In Leadership Learning (WILL) programme aimed at developing strength in women business leaders. With a theme such as “Developing and empowering our female talent in the Caribbean”, Digicel says the programme is already reaping real rewards.

During a forum held at St. James Club Morgan Bay Hotel last Friday, close to 60 women were part of the audience that got the opportunity to listen to leading women in Saint Lucian society relate their struggles and success stories.

Over the past year, Danica Murphy, founder/director of Prism Leadership and Change Consulting, was contracted by Digicel to facilitate the WILL programme so as to equip women with the confidence and other soft skills necessary to advancing in their careers.

Murphy said that based on the findings of a KPMG study released that October that focuses on women in leadership roles, men often put themselves forward for an opportunity in the workplace despite often having only about 60% of the skills and capabilities required for the job. Women, she said, often hold back until they feel they have 100% of the required skills set.

“What we’re trying to do is manage that gap: to make women a little more confident about their capabilities and build a network of mentors and peers to support them through bridging that gap,” Murphy told The VOICE.

Murphy, who has an educational background in psychology, has worked as a certified public accountant and has over two decades of experience in business advisory services, said the programme targets key areas to achieve its objectives. The programme, she said, places much emphasis on personal strengths, building confidence around and learning how to apply those methods in everyday life.

While the programme targets women, Murphy said the aim was not to sideline men or prove that women need any special help to measure up to men. Rather, she said, the purpose was to demonstrate to women that they do have what it takes to function adequately in the working environment despite their gender.

“One of the things on which we’ve always prided ourselves in developing the course, is that men and women work together and we have to support each other,” Murphy explained. “The purpose of this course wasn’t to marginalize or emphasize one group; it was simply to bridge a gap that exists for women that doesn’t seem to exist as much for men.”

Murphy described the messages from the speakers at the seminar as “fantastic”, adding that participants in the programme are sure to come away with an increased level of confidence from the stories the speakers shared.

“I think they sparked a lot of thought and really stretched people out of their comfort zones which I think, is always interesting in these types of forums.”

Digicel Country Manager, Siobhan James-Alexander said the four-month-long six-module WILL programme was launched last December to empower women within the organization to pursue leadership roles. She added that the programme seeks to get women to do some introspection and own their career path, whether or not they choose to remain with Digicel.

Several women graduated from the Saint Lucia leg of the programme with 168 more to graduate when the programme is rolled out targeting employees across all Digicel markets, James-Alexander said.

Last February was Jamaica’s turn for the programme with another batch graduating in the Turks & Caicos Islands leg in May. However, participants from the three legs of the WILL programme come from various territories.

Another crucial factor involved in the WILL programme is the value of networking. Most of the participants are at either management or supervisory levels and the thrust is to make them feel comfortable to aspire to higher office. As such, networking skills become important, especially when it comes to sourcing mentors.

“We didn’t want this to be just about telecoms (so) it was important to choose from a cross-section of women… The panel created that diversity and engaged the participants,” said when asked about the choice of speakers.

Having benefitted from the WILL programme herself, James-Alexander recommends that other corporate entities emulate the bold step being made by Digicel to mould tomorrow’s crop of confident, influential women for the corporate world. She feels more empowered after joining the programme, she added.

“I have walked away with that concerted effort and commitment to self that I probably didn’t have as much of before,” James-Alexander said.