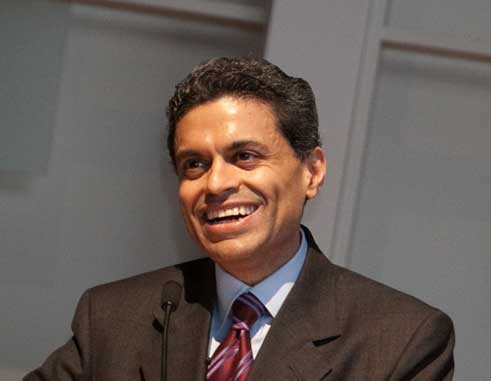 LET’S take a page from Donald Drumpf’s book and ignore political correctness for a moment: It appears the liberal arts are screwed. Well this was not exactly how renowned political pundit and best-selling author Fareed Zakaria articulated the problem, but it nonetheless makes the same point. Mr. Zakaria believes that the liberal arts must be rescued at all costs because they matter in a world that is increasingly run by synthesizers able to put together the right information at the right time and make important choices wisely.

“In Defense of a Liberal Education” is the title of Mr. Zakaria’s entrancing new book which has been welcome by liberal arts intellectuals and scholars the world over – at a time when the humanities are under attack and have been relegated in many universities and colleges to secondary status, in favour of schooling, training and apprenticeships in the social and natural sciences. Reading between the lines, Mr. Zakaria seems to suggest that the decline in the liberal arts represents a dismemberment of intellectual cohesiveness in higher education.

That the liberal arts have lost a lot of lustre in recent years is a development liberal arts colleges around the world have observed from longitudinal studies – which perhaps speak to not only the changes in the intellectual metabolism of world societies, but also underlie socio-educational problems that have been held in abeyance for a while. Hence, Mr. Zakaria’s arguments are a necessary defence of an idea under siege.

In America, for instance, the governors of three major states have vowed to discontinue subsidizing the liberal arts, as have several leaders of developed nations including President Barack Obama who has gone on record suggesting that the liberal arts are superfluous: “I promise you, folks can make a lot more, potentially, with skilled manufacturing or trades than they might with an art history degree,” he declared.

Yet, for the liberal arts, is the future really a dark chasm of yawning uncertainty? Has creativity been stifled under a blanket of enforced educational conformity?

In his usual display of intellectual fortitude, Mr. Zakaria, a CNN host and Harvard doctoral graduate meditates and expounds on the virtues of a liberal arts education – arguing that the university is much more than a vocational school, and that the flight from the liberal arts is leaving us impoverished intellectually, culturally and socially. Along the way, he criticizes the research-centric nature of many university faculties and takes them to task for being self-interested and too specialized while consuming increasing amounts of state resources. Such selfishness and enrichment, he argues, has destroyed a once-thriving cross-training culture in America and in many regions of the world, much to the detriment of students and learning.

“Just as athletes do exercises unrelated to their own sport,” he writes, “so students should study fields outside their academic area of focus.” To add further intellectual weight to his argument, Zakaria quotes Thomas Cech, the Nobel Prize-winning chemist: “Analogously, a liberal arts education encourages scientists to improve their ‘competitive edge’ by cross-training in the humanities or arts. Such academic cross-training develops a student’s ability to collect and organize facts and opinions, to analyze them and weigh their value, and to articulate an argument, and it may develop these skills more effectively than writing yet another lab report.”

It seems the world has suddenly become enamoured with the technical and mechanical ways of doing things (at the expense of free-thinking), perhaps fomented by the economic realities of international competition, technology and globalization (socio-economic movements do have a bearing on curricula). Unsurprisingly, an ever-growing number of young students are opting for professional training and careers in business, management and marketing as they see them as directly related to the job market and necessary for the increasing demands of scientific and economic literacy. And I don’t necessarily begrudge the economic choices made, since it would be only natural for politicians, in an age of mass unemployment and low growth, to be eager to promote the type of education and tools that are marketable and might lead directly to a job.

However, the traditional trappings of economic growth alone will not be enough to get everyone into work. Economies and societies will require creative thinkers and cultural artists to produce organic ideas (intellectual property) that can spur wealth creation in what has been termed “talent-intensive industries of the 21st century”. The idea that the cultural economy might be the biggest hope for developing nations engenders the need for trained actors, historians, writers, poets and even philosophers to consider their place and role in the new economic dispensation.

Recognizing that in an age of educational expansion, American universities are producing ever fewer liberal arts graduates who can apply their creative thinking to industrial and marketing solutions, Mr. Zakaria writes: “Around the world, the idea of a broad-based ‘liberal’ education is closely tied to the United States and its great universities and colleges. But in America itself, a liberal education is out of favour. In an age defined by technology and globalization, everyone is talking about skills-based learning. Politicians, business people, and even many educators see it as the only way for a nation to stay competitive… An open-ended exploration of knowledge is seen as a road to nowhere.”

Mr. Zakaria convincingly deconstructs the argument that technical and vocational education are most suited to automated economies “with their rapidly expanding computational power”, by brilliantly explaining that the liberal arts will potentially generate the growth needed in creative economies requiring the skills of writing, speaking and learning, “because it is not based on routinized knowledge”. On account of an information-rich society that has become attention-poor, he contends that these skills form a robust “intellectual foundation” for anyone seeking to navigate an increasingly information-heavy, knowledge-based and service-oriented economy.

Perhaps the best bit of Mr Zakaria’s wise counsel is his conviction that the strength of a liberal education can be applied in the pursuit of business possibilities and creative economic solutions. Having engendered provocative debate on the real value of a liberal arts education, he points out deftly: “When I got to America for college, I quickly saw the immense power of a liberal education. For me, the most important use of it is that it teaches you how to write… Whether you’re a novelist, a businessman, a marketing consultant or a historian, writing forces you to make choices and it brings clarity and order to your ideas. If you think this has no use, ask Jeff Bezos, the founder of Amazon.” Didn’t someone say that education is not merely the filling of a pail, but the lighting of a fire?