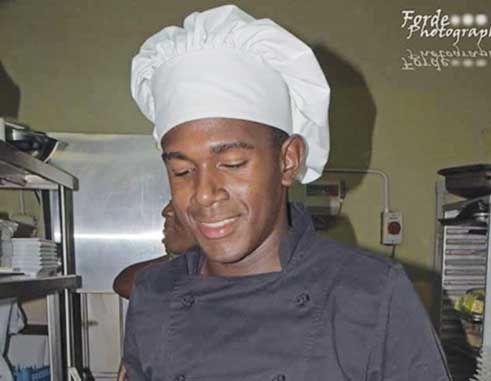 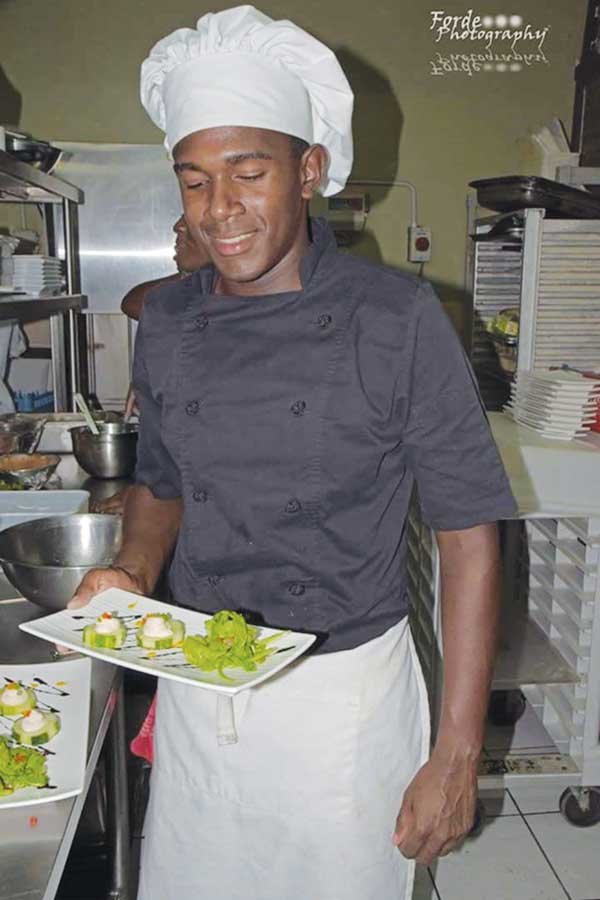 WITH the current onslaught of gastronomy- themed reality TV, one often borrows the popular line (from Ratatouille’s fictitious Chef Gusteau): “Anyone can cook” to justify their culinary creations or be it, disasters.

To Nyhymn Terrance, a humble 19 year old Ciceron resident, the kitchen is his muse and sanctuary, a place where only mastery is forged. The young man formally commenced his journey in food exploration as a student of the St. Mary’s College where he was awarded the prize for Food and Nutrition in 2014 upon graduation. He recalls his bi-weekly regimen attending after-school classes at the St. Joseph’s Convent in a daring attempt to cover a four year programme in merely two years.

Clearly this was the catalyst for a whirlwind of flavourful events, since Terrance subsequently enrolled (2014-2016) in the Sir Arthur Lewis Community College’s Food and Beverage Operations Programme, an Associate Degree offered in the Hospitality Department of the Division of Technical Education and Management Studies. At the time, his decision was further inspired by St. Lucian Nina Compton’s then prevalence on the Bravo hit show ‘Top Chef’. While being lured by the aromas of his passion for cuisine he remained resolute in shattering myopic gender prejudices related to this career path. He also was determined to reverse the gross misconceptions held by some who deem the culinary field as being “unambitious” or “just hotel work”. Even through his work with peers on campus as DTEMS Student Council President, he continued to dispel these myths.

Next on Terrance’s academic menu is the ‘pièce de résistance’, the highly anticipated and extremely competitive Ministry of Foreign Affairs (MOFA) 2016 Taiwanese scholarship which whisks him away first to Taipei where he will immerse linguistically for a year. He is exploring the possibility of then moving on to the Ishou University to pursue his undergraduate degree in Culinary Management.

The rugby enthusiast savours this hallmark as he is likely the first St. Lucian to ever pursue this field in Taiwan. The two-time DTEMS Dean’s list awardee was freshly picked from a pool of approximately 138 applicants. His sole SALCC comrade scheduled to join him in the orient is Keisha Felix hailing from the Division of Arts, Science and General Studies.

Terrance appreciates that the Mandarin he will confront in his new academic journey is far from the locally common citrus fruit by the same name. He, however, values the immense global expertise to be gained from this experience, though initially he was sceptical about the potential language barrier.

Daunting as this new expedition may be, Terrance draws courage from his mentors who have succeeded through sacrifice. Among these models he highlights Chef Orlando and Chef Robby with whom he has worked and from whom he has gained invaluable knowledge. Terrance, though the average teen, also differs from others his age since his apprenticeship in the culinary arts already boasts the tutelage of a plethora of other seasoned local experts like Chef Craig at Cap Maison and Thierry at Calabash Cove.

Terrance sees God at his epicentre and uses His strength for guidance through this new five year long eastern adventure. As a budding entrepreneur and founder/director of ‘Fair Helen Food and Beverage Service’ (named in honour of his deceased grandmother Helene Terrance), the student plans unequivocally, to embrace the new culture so that he can return, having created a dynamic and novel culinary fusion which will become the signature that St. Lucia and the rest of the world will salivate for.

Terrance already exhibits a penchant for working with spices and local foods and will be refuting stereotypes by making “more than just noodles” in Taiwan. His message to our youth is, “how wisely you spend the 24 hours provided in a day, determines your success.”

The little boy who grew up diligently preparing pancakes for his parents, Bordelais Deputy Director of Corrections, Leonard Terrance and Communications Studies Lecturer at SALCC, Lisa Sargusingh-Terrance, is now on his way to cook up the most gourmet dish he has ever imagined!!