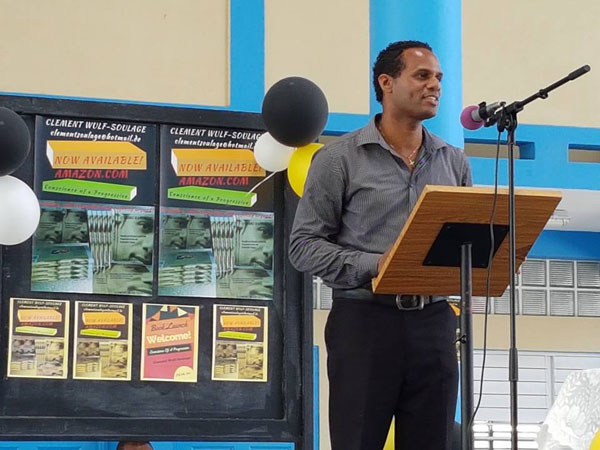 Last Saturday Clement Wulf-Soulage was joined by many highly esteemed guests to celebrate the launch of his third book “CONSCIENCE OF A PROGRESSIVE”. The event was held at the Corinth Secondary School, and featured performances and poem recitals by several persons including prolific local writer Dawn French.

The guests were addressed by a host of dignitaries including Tourism Minister Dominic Fedee, former External Affairs Minister Alva Baptiste, Permanent Secretary Titus Preville and veteran journalist Earl Bousquet, who all poured encomiums on the writer.

Also present was prominent newspaper columnist John Peters and radio host Anderson Lake. The theme of the keynote address, which was delivered by Mr. Peter Lewis, centred on leadership and positive change in society.

CONSCIENCE OF A PROGRESSIVE is fast becoming a think-tank, due to the wide range of ideas and opinions presented in the book. The book’s thematic focus is leadership, change and economic development, and seeks to reconfigure the mind-set and the paradigms of the nation for its own success.

Speaking at the launch of the book, Wulf-Soulage said the 260-page publication is presented in seven compact and multifaceted chapters and provides readers with insights into the path of economic recovery and development, pathways to social progress and good economic governance.

Wulf-Soulage said: “This book is an important milestone for me. As an economic progressive, I needed to explain my vision and insights into what progressives believe and what their plan of action for social change and economic development should be.”

The former university lecturer further explained: “Hillary Clinton likes to say: ‘I am a progressive who likes to get things done.’ For me, this statement exemplifies what drives social progress and economic development – execution and implementation. Progressives believe that it is not the images of ideology, but the imperatives of technology and organization which determine the shape of economic society.”

This Saturday July 23, the book-launch event continues as the author goes to Soufriere to present his work at the Soufriere Public Library at 10 a.m. The publication is on sale at EC$80 per copy and can be purchased directly from the author or ordered on AMAZON.de. The book is published by Espresso Tutorials, a German publisher.