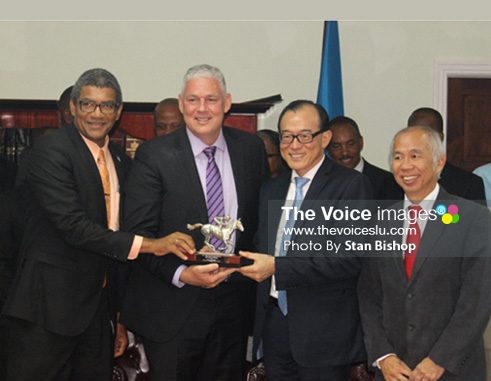 Share this post
THE perennial lament that the island’s southern quadrant has been short on development is likely to become a thing of the past following a major development project earmarked for that area, announced yesterday.

Prime Minister Allen Chastanet and Chairman of Desert Star Holdings Ltd, Teo Ah Khing, signed an agreement that should pave the way for a US$2.6 billion international standard integrated development.

Dubbed “Pearl of the Caribbean”, the major multifaceted 700-acre project will include a marina, racecourse, resort and shopping mall complex, casino, free trade zone, extensive entertainment and leisure facilities and over 1500 architecturally-designed villas and apartments.

Commencement on the project’s initial phase is slated for next year, pending approvals and other logistical matters to be ironed out by the Citizenship by Investment Unit (CIU) and the Development Control Authority (DCA).

The Prime Minister said Teo’s vision for the project dovetails with the island’s continued search for economic viability, sustainability and social equity with its partnership, adding that the venture will provide thousands of Saint Lucians with jobs.

“The Government of Saint Lucia feels satisfied that this investment will be a key driver for the south and a catalyst for further investment in the southern part of the island,” Chastanet said.

In order to facilitate the investors, Chastanet said government will amend the Citizenship by Investment Act so that key aspects of the project are accommodated in the current categories.

“The horse racing aspect of the project, which is central to its lifestyle component, needs to be incorporated within the categories of an approved project – not on its own but within the broader context of an integrated project and not solely based on hotel construction,” Chastanet explained.

Government will also review the limitation on applications (which currently stands at 500 per year) prescribed by the CIP legislation, thereby allowing the quantum of approvals to be based on policy considerations.

The Prime Minister said the processing time for applications made under the CIP will be expedited after approvals have been granted without foregoing the due diligence factor.

Chastanet said the project has been on the table for over a year now and the road to yesterday’s signing gained traction after he met with Teo within his first week in office. When asked why the signing of the agreement was signed at this time, he told reporters he had not a clue.

“I don’t know why the project had not proceeded quicker because in all reviews of it, it really is a project that, I think, can change the paradigm here in Saint Lucia,” Chastanet said.

Chastanet said that prior to the signing ceremony, the DSH team made a presentation of their plans to Cabinet as well as the chairpersons of CIP Board, SLTB, DCA, Investment Board and Winston Trim, whose family has operated Trim’s Riding Stables for over 60 years.

The project is being touted as a major attraction for leisure travellers from throughout the region and the wider world. One of the investors’ aims is to further promote the island as an exquisite touristic destination.

“I truly believe that this is going to further enhance the viability of expanding the airport (and) making sure that we have the cruise ship berth in the south, Chastanet said.”

The first phase of “Pearl of the Caribbean” is expected to begin six months after the granting of requisite approval with the construction of the horse racing track. The second phase, the building of the hotel, is expected to last for two years. A third phase, the university campus, is among the ambitious plans.

Minister for Investment, Bradley Felix, said unemployed young men in the south can now profit the opportunity to learn a skill, especially in the equestrian industry, a pastime of Vieux Fort.

“In discussion with Teo and the team, we recognized that for every thoroughbred, we need at least four or five people to take care of them. So the opportunities are endless and not just limited to the equestrian aspect,” Felix said.

Malaysian-born to Chinese parents, Teo, who is also Chairman of DSH Caribbean Star, said he was pleased to make the major investment in Saint Lucia, adding that the island stands to benefit immensely from the project. Among his many achievements is designing and building the iconic Meydan Racecourse for the 2010 Dubai World Cup.

“As investors from the Far East, we believe that this is a very win-win situation: that we can contribute our expertise, our resources, our know-how and work together with a very dedicated Cabinet team led by the Prime Minister to deliver this promise to the people of Saint Lucia and the region,” the self-made billionaire said.